One of the first notable instances of public opposition to discrimination against women in Canada occurred in 1869, when young Hannah Maria Norris from Canso, Nova Scotia, fought for her right to travel and serve as a missionary in Burma. When the male-dominated Baptist Foreign Mission Board rejected her application because of her gender, she organized with other women in Nova Scotia to support her right to serve in the public sphere. After exerting considerable public pressure on the board, Norris eventually won this right.

Norris’ act embodied the crucial feature of first-wave feminism: the demand for public rights. This process focused on the right to vote and to hold public office in Canada, rights that would take much longer to attain. The National Council of Women in Canada (NCWC) was first established in 1893, and it is still an important women’s advocacy organization. 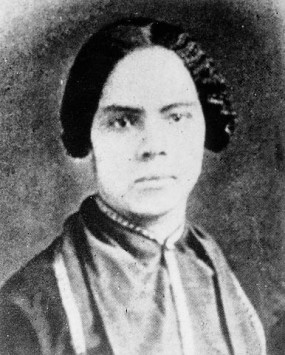 In this changing political climate, many Canadian women writers chose to use their voices to help work for public change. Women in the late 1800s, such as Agnes Maule Macher, Mary Ann Shadd, Sui Sin Far (Edith Maude Eaton), E. Pauline Johnson, and Lucy Maude Montgomery, wrote to open up debate and disrupt normative ideas of gender, rather than solidify colonial and patriarchal values. Shadd was an African American woman who worked actively for political reforms in the United States and Canada. Shadd lived in Canada from 1850-60, where she wrote A Plea for Emigration (1852). She was an abolitionist, education reformer, newspaper publisher, and later a vocal proponent of the growing suffrage movement—a movement that sought women’s rights to vote and participate in public life. 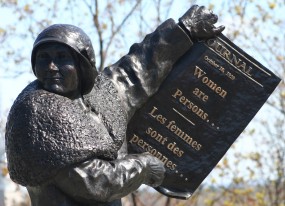 Nellie McClung, a notable Canadian author, actively fought for the right to vote and to hold office in Parliament as one of the Famous Five, all of whom were involved with the NCWC. A particularly notable moment in her activism appears in her story “The Play” (in Purple Springs, 1921), which offers a fictionalized account of a satirical, political play put on by the Women’s Political Equality League, as part of their fight for the vote in Manitoba in 1914. The play-within-the-story presented a mock parliament that reproduced the words of Premier Rodmond Roblin and other delegates dismissing the suffragist’s petition for the right to vote. The writers created a satire of this initial event by changing all references to women to men, and vice versa. This simple reversal revealed the sexism of the male delegates, and forced a reconsideration of the issues surrounding women’s suffrage. Women achieved the right to vote at the provincial level in Manitoba in 1916.

McClung’s essay “Speaking of Women” (1916) outlines a Canadian version of the suffrage movement. One of the things to notice about McClung’s vision of suffrage is how narrow it is. She does not suggest, as she puts it, that women should “usurp men’s place in the world” (534). Rather, she asks that white educated women be granted the vote and the right to full citizenship in Canada—a request that was still quite radical at the time. McClung equates those who oppose progress on women’s rights with those who opposed ending slavery, but she does so with a sense of biting, satirical, humour:

Men held to slavery for long years, condoning and justifying it, because they were afraid that without slave labor life would not be comfortable. Certain men have opposed the advancement of women for the same reasons; their hearts have been beset with the old black fear that, if women were allowed equal rights with men, some day some name would go home and find the dinner not ready, and the potatoes not even peeled. (533)

Implied in McClung’s argument is the idea that opposing women’s right to vote is just as distasteful as condoning slavery. She notes that women are already in the workforce, and that “thirty per cent of the adult women of Canada and the United States are wage earners, and the percentage grows every day” (534). According to McClung, “Men and women have two distinct spheres, when considered as men and women, but as human beings there is a great field of activity which they may—and do occupy in common. Now, it is in this common field of activity that women are asking for equal privileges” (534). She conceded that men are stronger than women, and perhaps better workers, but that this biological advantage does not mean that women cannot be trusted to vote: “There is not really much argument in pointing out that women cannot lay bricks, nor string electric wire, and therefore can never be regarded as man’s equal in the matter of citizenship” (534).

The arguments in favour of suffrage and the demand for equal participation in politics were often based on the importance of women’s roles as mothers and wives. However, although they fought for equal gender rights, suffragettes did not necessarily hold the notion of equality for all classes and races. Many of the same women who campaigned for the vote, such as McClung, also supported the discriminatory sterilization of those they deemed unfit to have children. The Sexual Sterilization Act targeted people with mental deficiencies and physical challenges in Alberta (1928–1972) and British Columbia (1933–1973).