Using diasporic theory and applying it to “Canadian literature” requires we think critically about the labels literary scholarship uses to divide itself into different fields of enquiry. This section introduces students to reading and discussing scholarly work in diaspora studies by providing a close reading of a scholarly article and demonstrating how such work is performed. 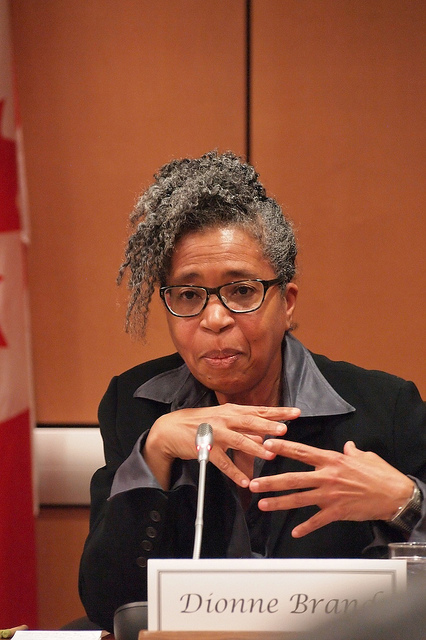 Andrea Medovarski’s “Roughing it in Bermuda: Mary Prince, Susanna Strickland Moodie, Dionne Brand, and the Black Diaspora” is a strong example of the self-interrogating and boundary-crossing work important to diasporic analysis. In this article, Medovarski asks if approaching Canada’s canonical and colonial writers as diasporic subjects changes how we understand their work. She uses Susanna Moodie, a white British writer who wrote prolifically about Canada after settling here in the 1830s, as an example: “Rather than framing [Susanna] Moodie as a settler writer, how might the dominant discourse of English Canadian literature be revised if we understand her instead in a diasporic context?” (95).

Just as Moodie’s writing is not usually traced to the [British] slave narrative, [Dionne] Brand’s writing is not often traced to the English Canadian settler tradition, despite her repeated invocation of some of the literary tropes established by Moodie and subsequent canonical writers. While the Canadian landscape and her place in it have been a sustained preoccupation in Brand’s corpus, these moments are not often considered by critics who have focused largely on the migratory, postcolonial, and diasporic elements of her writing . . . . While Brand’s Caribbeanness is often foregrounded, there are also important ways of thinking about her in a specifically Canadian context, that insist on a decoupling of race and nation and stretch the boundaries of what ‘CanLit’ is and looks like, and the questions it asks of the nation. (103-04)

When you begin reading academic articles and books, it can be difficult to add your own arguments or differentiate your thinking from the published author’s. These are skills you will build with practice. One exercise that helps is to read two academic works on a similar topic and compare their arguments. In particular, you want to consider where they agree and where they differ. Then, ask yourself: is one reading more useful for the text you’re analyzing, or are there parts of each that are useful? Why?

After reading Medovarski’s “Roughing it in Bermuda,” read diaspora scholar Robin Cohen’s sub-chapters “Imperial Diasporas,” “The Settlement of the British Empire,” “The End of the Dominion Diaspora,” and “Conclusion” from Global Diasporas: An Introduction (66-81). Cohen takes a different approach to the issues Medovarski raises, and neither his nor Medovarski’s arguments are unassailable. One significant critique of Cohen, for example, is that his reflections on the British diasporas to Canada only briefly mention the Indigenous peoples this diaspora displaced, and mischaracterize those varied tribes as all “Inuit” (74). Knowing this may give you a starting point for your comparison.