What is “Restaurant Literature”? Depictions of Chinese Restaurants in Canadian Literature 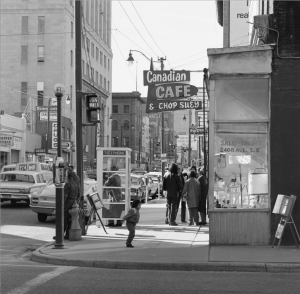 This chapter identifies a growing body of Canadian literary works depicting Chinese restaurants as sites and sources of narrative, and seeks to answer a series of questions. What are the characteristics of the genre of restaurant literature? What are the key texts—those responsible for shaping, reshaping, and innovating this genre? What historical contexts have influenced this genre’s development? This chapter looks closely at a representative selection of restaurant literature in order to explore ways in which authors have written Chinese restaurants into the literary landscape, and to understand storytelling’s ability to introduce readers to new characters, cultures, and perspectives over time. It distinguishes between two different bodies of literature in Canada, first addressing a group of works written by those outside the Chinese community in Canada, and then addressing another group of texts written largely by those within the Chinese Canadian community.

Renowned literary critic Sandra Gilbert argues that food is a topic of overwhelming and widespread interest in the twentieth and twenty-first centuries and that a better understanding of this phenomenon will unlock insights about our world. “Our recipe novels and poems,” she wrote in 2014, “our food polemics and cooking programs represent a gastronomical feeding frenzy that’s both unprecedented and deeply significant” (7-8). Food in literature fuels narrative development as much as it feeds literary characters. One only has to remember the various culinary mishaps in Anne of Green Gables, for example, or the doll-shaped cake Marian consumes in the conclusion of Margaret Atwood’s The Edible Woman. In A Feast of Words, literary critic Anna Shapiro focuses her study on fictions in which, were the food not present, the stories would be “broken-backed, useless, with a critical link in the plot key to the character missing” (17). Food is also a remarkably effective tool for a writer. Fiction writer Carol Shields explains that food scenes provide opportunities for refining the depiction of characters and their place and moment in time (45).

But what distinguishes a literary restaurant scene in particular from a literary meal scene more generally is that some characters, usually customers, are depicted outside their home environment, often outside their comfort zone. This is particularly true of Chinese restaurants in Canadian literature, which, for a large part of the twentieth century, were portrayed by authors outside the Chinese community in Canada as both very familiar (because ubiquitous) and yet exotic (because outside the home space, and distinct from home foodways). For example, the speaker in Lorna Crozier’s poem “Home Town” (1988) communicates the familiarity of restaurant spaces when she lists three fundamentals of prairie life: “a Pool grain elevator, a Chinese cafe, / and one main street no one bothered to name” (109). But in early restaurant narratives, these omnipresent restaurants, nevertheless, served as significant sites of cultural encounter for characters and readers alike. Some examples include Sinclair Ross’s short story “Cornet at Night” (written in 1938) from The Lamp at Noon and Other Stories, and the Bluebird Café in W. O. Mitchell’s Who Has Seen the Wind (1947). 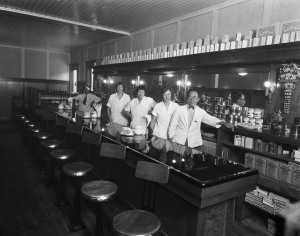 Interior of Club Cafe, Chinese Restaurant in Ponoka, Alberta, [ca. 1927]. Photograph by B. S. Cameron. Reproduced with permission from the Glenbow Archives (ND-2-111).

By the 1970s, Chinese restaurants began to make more frequent and extended appearances in Canadian literature, written into the literary landscape by authors both outside and within the Chinese community in Canada long after such restaurants had been operating in actual rural and urban centres. With the exception of a few cameo appearances, Chinese restaurants had been notably absent from early Canadian literature. But by the late 1970s they became a topic of keen interest, prompted perhaps by Canada’s increasing focus on multiculturalism during the 1970s and by an emerging Asian Canadian writing scene. One notable development in the genre was that writers from the Chinese community in Canada grounded their narratives in these restaurants, offering central characters who were at home in, rather than visitors to, these spaces. Such restaurant narratives invited readers into intimately detailed spaces to glimpse the lived reality of restaurant labour and the broader context of Chinese immigration history in Canada.

Of course, the history of Chinese restaurants is intimately connected with Canada’s history of racist policies targeting the Chinese community, including the Head Tax (a fee levied for each Chinese individual in Canada), which was first introduced in 1885 and later increased in 1901 and 1904; the Chinese Immigration Act (also known as the Exclusion Act), which was in place from 1923 to 1947; and legislation during the early decades of the twentieth century that prohibited white women from working in restaurants, laundries, and other businesses owned by Chinese Canadians. It is useful when reading Chinese restaurant narratives to consider the ways this legacy of racism might affect what stories were shared by the Chinese community, when and how they were told, and why it took so long for these stories to be considered a distinct and important body of literature.

Not surprisingly, given the history of the Chinese community in Canada, this group of texts is preoccupied with barriers—social, cultural, linguistic, economic, and physical—and how individuals work to overcome them. Something to watch for is the way the texts speak to some, or all, of three complex themes: visibility and invisibility, mobility and stasis, and communication and miscommunication. Despite the persistence of the three themes over time, however, it would do a disservice to this robust body of literature to suggest that restaurant narratives share the same linear narrative trajectories—as, for example, moving towards increased visibility, mobility, and communication. Instead, writers explore the subtle implications of each of these themes in relation to Chinese restaurant spaces and stories, which is why it is valuable to explore them in detail.