All projects must promote greater opportunity within and equal access to Canada’s arts and cultural institutions for artists from diverse cultural backgrounds; must encourage and foster the development of the creative arts as a vehicle for the expression of heritage cultures in Canada and as a creative expression of Canadian multiculturalism; and must support and promote projects that reflect and/or foster appreciation of the cultural diversity of Canadian society. 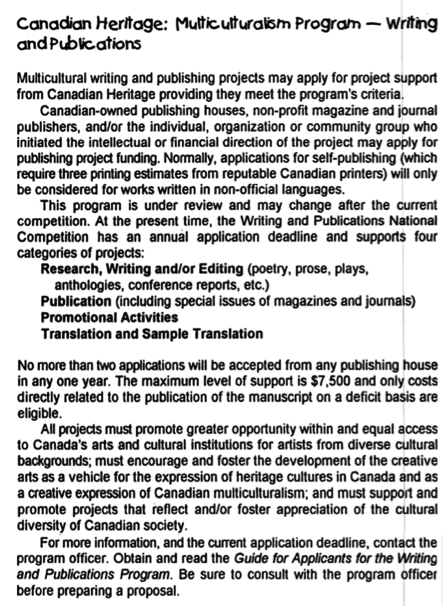 A sample call for applications to the Writing and Publications Program circulated during the 1990s by the Multiculturalism Directorate of the Department of Canadian Heritage. Image originally collected by Joe Blades in In the Dark: Poets and Publishing (Broken Jaw Press, 1997, p. 52), and reproduced with permission of the author.

The above paragraph states the publicly advertised eligibility criteria for multiculturalism funding through the former Writing and Publications Program (WPP). In this exercise you will close read the funding policy of the WPP, analyzing how it conveys its objectives through language, evaluating its criteria in light of your analysis, and rewriting the statement on your own terms.

In his 2006 Canadian Literature editorial “Am I a Canadian Writer?,” M. G. Vassanji discusses his experiences being labelled a “multicultural” author. Vassanji, one of Canada’s most renowned writers, is a Canadian citizen and part of the South Asian diaspora: he was born in Kenya, raised in Tanzania, went to university in the US, and immigrated to Canada in 1978 (he identifies himself as “African Asian Canadian”). He was also a recipient of WPP grants, which supported his establishment of the literary journal The Toronto South Asian Review, his organization of important conferences on South Asian writing, and his own successful writing as a novelist; in fact, Judy Young cites Vassanji’s career explicitly as among the earliest and most important examples of the WPP’s success.

Read Vassanji’s editorial, noting connections to our focus in this chapter on distinctions between multicultural/mainstream Canadian writing, and on multiculturalism’s management of culture and ethnicity. Then consider the following questions, drawing on one or more of the arguments in the “Scholarship” section of this chapter.