Literary Analysis of The Weakerthans’ “One Great City!” 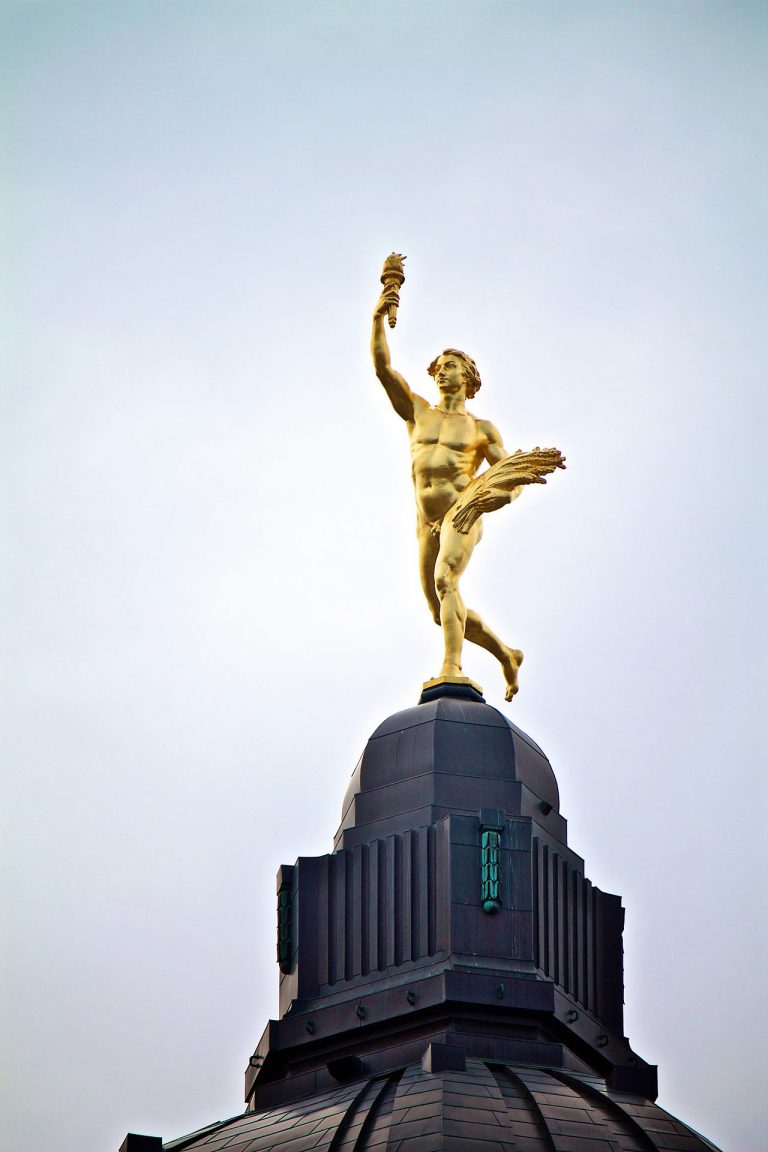 Using some of the scholarship and skills from the previous section, we will now begin to close read The Weakerthans’ song “One Great City!” Despite being only 2:57 in length, a well-written song like this could take up many pages of analysis. Here, therefore, we will mainly focus on the infamous phrase, “I hate Winnipeg,” and track how it changes over the span of the song. Throughout our analysis, we will trace how we might relate our findings back to larger scholarly conversations around locality and identity, and present the argument that “One Great City!” is a complicated, frustrated love song for Winnipeg.

“One Great City!” opens with a series of descriptive images that help us determine where and when the narrative is taking place: “Late afternoon, another day is nearly done. A darker gray is breaking through a lighter one. A thousand sharpened elbows in the underground.” The imagery in these phrases is bleak: the short, un-enjambed lines are sharp as the “sharpened elbows,” and the use of the verb “breaking” underscores the harsh, brooding violence of a darker gray sky ousting a “lighter one.” The next image we are given is of a clerk in a Dollar Store, who is “closing up, and counting Loonies, trying not to say,”—here it comes—“‘I hate Winnipeg.’” In their book Sound Tracks: Popular Music, Identity, and Place, John Cornell and Chris Gibson argue that “the sounds and rhythms of names, rather than the ‘reality’ of place” (72), usually dictate where the song is set, with “glamorous and exciting” (72) place names being the most common choices. From the first lines of “One Great City!”, however, we can already see that Samson is flouting these songwriting traditions. We can use this observation to argue that Samson is playing off of listeners’ expectations of songs about place, using irony in order to further enhance the bleakness of his sonic portrait of Winnipeg. At the same time, however, we can also argue that Samson is elevating Winnipeg’s status by writing a song about it, lending his bleak but beloved city some ‘glamour and excitement’ by immortalizing it in song.

In the next verse we meet a bus driver who is running late on his route, and “hears the price of gas repeat his phrase: ‘I hate Winnipeg.’” Notice how the tone of the repeated three words has already shifted? The Dollar Store clerk is “trying not to” express hatred for his or her own city, despite being forced to count a pittance of earnings (“Loonies”) at the end of a long shift. When the “price of gas” is personified to speak, however, it ventriloquizes hostile corporate voices from outside of the city. In this way, the speaker suggests that the inflation of gas prices is equivalent to an expression of hatred for the working class communities that these increases most negatively affect.

To support this reading of the song, we should turn to scholarship on place, identity, and class that we have compiled. We might choose to cite Michael Keith and Steve Pile’s collection, Place and the Politics of Identity, which traces the importance of spatial metaphors to understanding social power dynamics, or what they term “the hidden human geography of power” (4). In choosing to depict working class characters having frustrating interactions with their city (traffic delays, overcrowded subway stations, the rising price of gas), Samson critiques how “relations of power and discipline are inscribed into the apparently innocent spatiality of social life” (Soja 6). This observation, that “One Great City!” is more critical of the inequalities inscribed in sociopolitical spaces than of Winnipeg itself, is further supported by the third and final verse.

In the first line of the final verse, the speaker morphs from a detached third-person narrator to someone that identifies as part of the city: “And up above us all, leaning into sky, our Golden Business Boy will watch the North End die.” If these terms are unfamiliar, it might be time to consult the material we’ve assembled on the history of Winnipeg. Once we do, we will discover some key facts to guide our interpretation: as the Government of Manitoba’s website explains, the “Golden Boy” is a statue on the roof of the Legislative Building in Winnipeg, meant to symbolize “enterprise and eternal youth” (n. pag.). It is particularly ironic, therefore, that the statue should be watching the North End, a traditionally working-class, multicultural neighbourhood, “die.” With the addition of the word “Business” into the Golden Boy’s title, the speaker implies that big, capital-B “Business” is economically displacing locals, all the while hypocritically “sing[ing] ‘I love this town.’” Proving that actions (literally, in this case) speak louder than words, after publicly singing of his false love, the “Business Boy” will “then let his arcing wrecking ball proclaim, ‘I hate Winnipeg.’” In this verse’s exploration of power and responsibility, Samson seems to be interrogating the notion that corporate business interests can genuinely reflect “love” for a city. Could we argue that the working class characters’ “hatred” for Winnipeg is actually more positive for the community than the “Golden Business Boy’s” love? 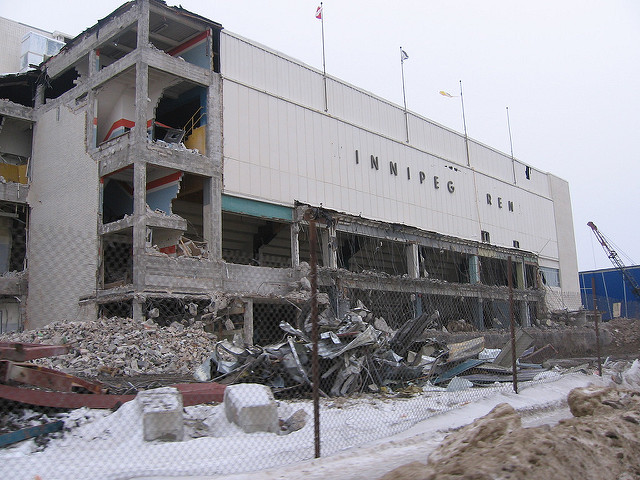 In this song, Samson explores the unique relationship that locals have with their own city, one of simultaneous hatred, affection, and fierce defence. Unlike many songs about cities, the characters in “One Great City!” express complex emotions about their home that go beyond hatred or affection. This ambivalence seems to echo scholar Barbara Bender’s argument that a person may, from moment to moment, or even in the same moment, “hold conflicting feelings about a place” (303), and that these conflicts can become “volatile” (303). In a beautifully alliterative phrase in the bus driver’s verse, the speaker says that “The crowded riders’ restlessness enunciates the Guess Who suck, the Jets were lousy anyway.” The Guess Who are one of the most famous bands from Winnipeg, and, at the time that this song was written, the Winnipeg Jets NHL hockey team was still defunct. This line encapsulates one of the major themes of the song: that part of living in a city is suffering through communal losses, embarrassments, and disappointments beside and amongst your fellow citizens. In other words, Winnipegers can complain about their city, but woe betide anyone who comes in and tries to take it away from them: their city’s flaws are theirs to own, theirs to sigh over, and theirs to love. Through rigorously analyzing a complicated song like “One Great City!” we can simultaneously intervene in scholarly conversations around locality and identity, and diversify the kinds of texts that these theoretical areas are used to analyze. Far more than a song listing complaints about the prairie city, “One Great City!” invites its listeners to consider the ways in which power and identity can become attached to place, and how hatred—which might be otherwise configured as protest—can become a productively disruptive force.