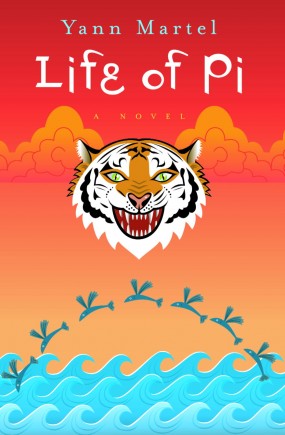 Life of Pi (2001) by Yann Martel. Used with permission from Random House of Canada

The Author’s Note is part of the paratext of Yann Martel’s Life of Pi that helps the text establish its cultural value. The Author’s Note is written in first person, and the title of the piece—“Author’s Note”—implies the speaker is Yann Martel, the author whose name is on the cover of the physical book. The speaker even gives a history of how he came to write “[t]his book” (v) by explaining his previous literary failures, some of which evoke Martel’s own earlier underwhelming literary efforts. Yet as the preface unfolds, the speaker says he met with “Mr. Patel,” the “main character” (x) of the novel Life of Pi. Suddenly, the truth of the Author’s Note is thrown into question—is the preface fact or fiction? What about the story in the narrative proper? This deliberate slippage between fact and fiction in the preface of Life of Pi destabilizes the implied reader’s assumptions about the novel, encouraging the reader to see the Author’s Note as a preface to a work of literature. At the same time, the fictional elements of the preface become apparent to readers as they progress through the novel.

The paratext of Life of Pi—the material surrounding the story, like the preface—frames the narrative and builds readerly expectations about the value of Martel’s text as a work of Canadian and Commonwealth writing while disrupting the division between history and fiction. Literary theorist Gérard Genette’s concept of paratext refers to all of the parts of a book around the main story, such as the cover art, back cover summary, blurbs, prefaces, dedications, and appendices. Although the author’s involvement with the production of the paratext is often unclear, the paratextual material is deliberately chosen to construct value in a text. Martel engages with several ideas about the value of literature and its role in national culture in the Author’s Note of Life of Pi. 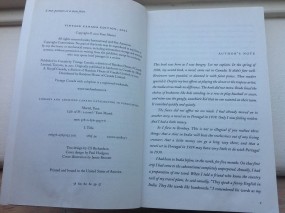 Author’s Note from Life of Pi (2001) by Yann Martel. Photo by Alissa McArthur / Canadian Literature, 2014. Used with permission from Random House of Canada.

At the end of the Author’s Note for Life of Pi, the speaker attempts to defend the importance of institutions like the Canada Council for the Arts and their funding of Canadian imaginative writing, saying: “If we, citizens, do not support our artists, then we sacrifice our imagination on the altar of crude reality and we end up believing in nothing and having worthless dreams” (xi). The speaker’s invocation of those who support art as citizens is telling. In this view, supporting the arts becomes one of the ways that Canadian citizenship is established, and by supporting the arts the citizen is given a valuable form of escape from “crude reality.” The speaker’s defense of arts funding is one in a long line of such defenses in Canada that are grounded on the belief that literature can improve the lives of Canadians. According to literary scholar Anthony Easthope in Literary into Cultural Studies, defenses of literary value tend to take one of three forms: mimetic, expressive, or formalistic (41). For mimetic critics, literature is valuable because it represents the complexities of reality more accurately than non-fiction writing, such as science or philosophy. For those who take the expressive approach, the value of literature is that it expands the reader’s ability to feel. Critics like Martha Nussbaum in Upheavals of Thought, for example, argue that reading tragic stories actually expands the reader’s ability to have compassion for those who are suffering. For those who take the formalist approach, the literary object defamiliarizes language and experience in ways that make the world strange, which allows readers to imagine their world differently.

A fourth defense of the value of literature, and one hinted at in the Author’s Note in Life of Pi, is that it supports national and cultural development and unity. In 1951, the Canadian government released the report of the Royal Commission on National Development in the Arts, Letters and Sciences, usually called the Massey Report in English Canada. In 1951, Canada still suffered from what has been called a colonial mentality, where people assumed that all things superior came from Britain. In support of Canadian cultural sovereignty, the report recommended that the government fund culture in Canada because having a national culture, and particularly a national literature, would help unite the nation. According to the Massey Report, a national literature is “the greatest of all forces making for national unity” (225; ch. 15, par. 12). The Massey Report defines Canadian literature as “the reflection in works of imagination of the interests, the ideals and the character of our people,” and suggests that Canada did not yet have “an adequate number of works that corresponded to this description” (222; ch. 15; par. 3). The report also suggested that the best way to ensure that Canada had an adequate number of works of imaginative fiction was to establish a “centre of gravity” (225; ch. 15, par. 12) for Canadian literature apart from British and American literature. In particular, the report suggested Canadian letters needed to be protected from “the deluge of the less worthy American publications” because they “threaten our national values, corrupt our literary taste[,] and endanger the livelihood of our writers” (225; ch. 15, par. 13).

The speaker’s defense of literary value in the Author’s Note in Life of Pi blends the nationalist and the expressive approach. He implies that literature expands the Canadian citizen’s ability to dream and that reading can transform the reader into someone whose dreams can be valued. Yet, there is a way in which the citizen of the Author’s Note both is and is not defined as Canadian. While the story of Patel is the story of a Canadian, it is a story set in the Pacific, and its centre of gravity is just as much Pondicherry, India, as Canada. Thus, Martel’s speaker may suggest that the Canada Council should fund stories that will help both Canadian and international citizens to dream.