Literary Analysis of A Woman Tenderfoot

A feminist close reading of A Woman Tenderfoot can help us gain insight into how Seton-Thompson includes suffragist messages in a text, which, on the surface, seems to be written merely for entertainment.

Near the beginning of her text, like many women travel writers of her day, Seton-Thompson addresses a readership that she defines as middle-class and female, and she encourages her readers to break out of what she sees as the conventionality of their lives. At the beginning of chapter 2, she asks, “[i]s it really so 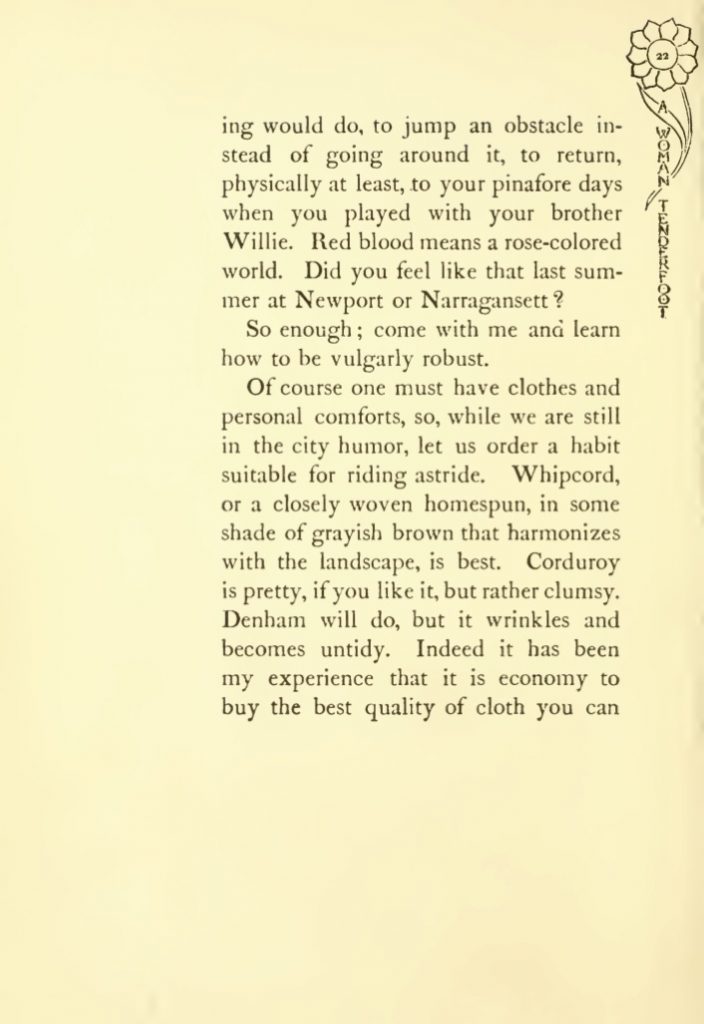 that most women say no to camp life because they are afraid of being uncomfortable and looking unbeautiful?” (19). In this rhetorical question, she reminds us of how much the physical mobility associated with camping goes against gender norms for Victorian middle-class women. Virginia Woolf famously critiqued the idea of the angel in the house, which she saw as the oppressive representation of women, often by male authors, according to a Victorian archetype of idealized middle-class femininity (Gilbert and Gubar 22). The angel of the house, associated with domesticity, motherhood, attractiveness, and sexual modesty, was quite opposite to the new woman, associated with freedom from social restraints (Nelson ix).

Seton-Thompson provokes her readers here to face their own fears about going against Victorian ideals of femininity by saying, “come with me and learn how to be vulgarly robust” (22). At the time, Theodore Roosevelt, whom the Seton-Thompsons knew personally (MacKethan 181-82), helped to establish the widespread idea that ostensibly masculine physical activities in the wilderness could lead to a form of spiritual awakening (Roosevelt 1). Like other American authors of the day, Seton-Thompson seems to extend American wilderness ideals to western Canada. And like other American women writers (Elizabeth Taylor; Mary Schäffer) and Canadian women writers (Agnes Deans Cameron; Sara Jeannette Duncan; E. Pauline Johnson; Agnes C. Laut) of her day, she seems to extend broader North American wilderness ideals, such as belief in the greater social value of physical mobility, to the new woman. Her use of the term, “vulgarly robust” (22) acknowledges the threat that this physical mobility poses to traditional ideals of femininity while at the same time suggesting the social value of change.

As her own adventure is under way, she increasingly describes her physical challenges in the wilderness as performances that involve risk and redemption. When travelling in and around what is now known as Glacier National Park in Revelstoke, BC, she falls while leading her horse next to a precipice. She describes ignoring her husband’s calls while figuring out what to do: “I had the stage, centre front, and it was all I could attend to” (308). Depicting herself with the metaphor of being at centre stage, she reminds us that her physical trial in the wilderness is not just a literal journey, but rather, as Butler would point out, a performance with social significance that would have been of particular interest to her female readers who were witnessing unprecedented shifts in gender norms.

She also seems to be performing Roosevelt’s notion of redemptive wilderness survival that was revered by readers of the day, proving to them that women can represent and perhaps access accompanying mainstream ideas of physical and social mobility. And, by explicitly referring to this experience as a performance, Seton-Thompson also seems to have a somewhat tongue-in-cheek attitude about the mainstream roles that she adopts. Rather than just imitating “the masculinist literature of wilderness adventure stories” (Grace xxxviii), she asks us to see this literature of gendered ideals as a performance that is open to ongoing reembodiment and reinterpretation.

Reflection Questions for A Woman Tenderfoot 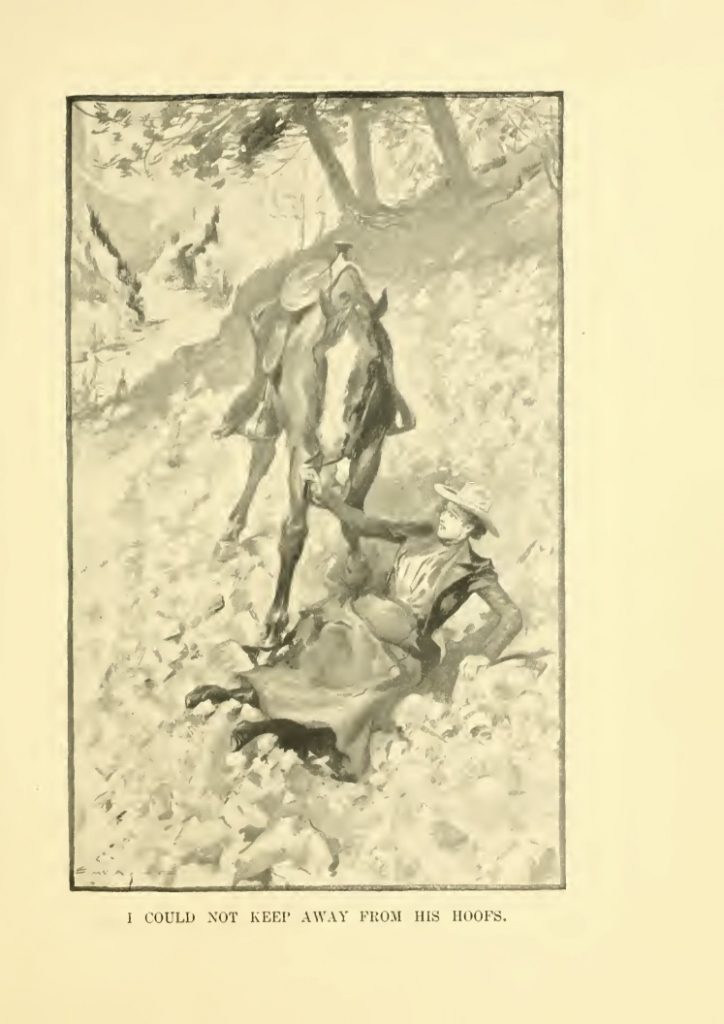 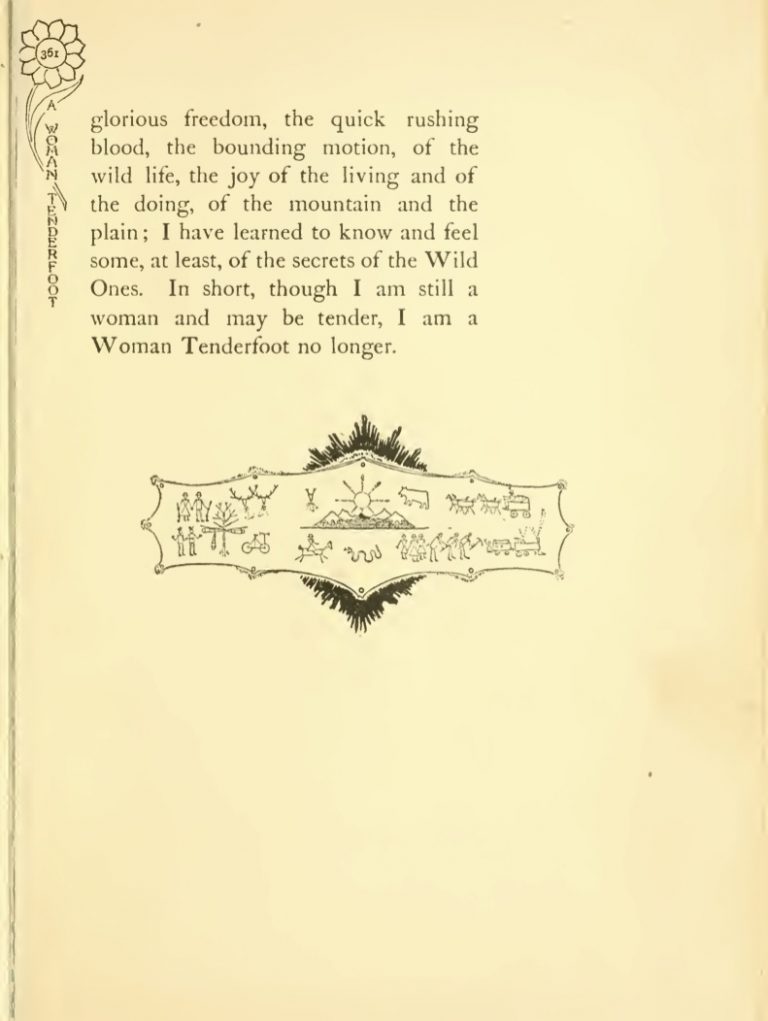