An Example Close Reading of “The Gravel Pit”

M. Travis Lane’s poem The Gravel Pit employs stanza placement to present a schematic map of space. The poem offers the pit as a location that reveals aspects of the interactions between human beings and what is thought of as a separate natural world. 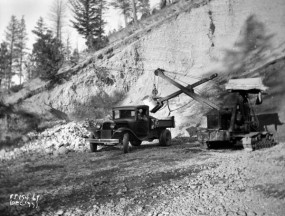 Lane locates the human observers on the periphery of the left margin—surrounded by seeping edges, animal marks, and plants—with the phrase We parked here. Human presence is assumed elsewhere in the poem, through the use of past tense verbs, and questions and observations about intentionality. The personal note is italicized, perhaps suggesting that it is handwritten. But the note is surrounded, and seems overwhelmed, by the indeterminately (repeated) / (repeated) scene around them in which animals and plants thrive in every direction. At the same time, the animals are noticeably absent from the sight of the observers, leaving only traces of their activities—much like the human observers who also disappear through the past tense statement of parked.

While seemingly contrasted, the tracks of the animals and the traces of human activity are also strangely synonymous, each overlapping with the other. For example, in the fifth stanza, the repeated plants and rabbit prints are stopped by the intervention of a truck tire (a human print), while in the sixth stanza the equally distributed mixture of garbage and vegetation repeats indefinitely. Even the final stanza offers a mud ditch in which sleeping frogs find plants and rubbish equated. In a sense, while the human artifacts infiltrate the scene, the animals and plants are taking them back or accommodating them in their own way, maybe reluctantly, maybe indifferently.

This poem about a gravel pit offers a map that goes well beyond its periphery. Only the first four stanzas seem to depict the pit, whereas the final three look beyond the edge. The poem slips into a view that moves beyond describing a place for the functional extraction of building materials to describing the detritus or mud, to the torn and broken, to the garbage produced by people. This poem, therefore, maps human activity in the world in its entirety, showing how it is more complex than developing a pile of some / builder’s slate—how human activity has an impact on the environment as a whole. In the gravel pit, this involves a strewing of human traces that mix with animal ones, a tearing and breaking of both artificial and natural things, and an alternation of animal presences and human ones.

Finally, it is a space in which living creatures are transient, with some humans that parked here temporarily to map the space, and animals that have moved on beyond the perimeter even if they turned aside / (looked back?). The question about looking back offers a point of re-entry for both the skunk and the writer. After all, both might return: the skunk to keep digging, (what for?), and the writer to write the map or to add details, about which one might also ask, what for? Therefore, this moment of transience, of brief observation and tracking, becomes also a moment for reflection or consideration of the terms of interaction. What are these human and animal observers thinking? What are their intentions as they move through this space? What do they think about the mixing of human and animal artifacts and so forth? It is through these tensions between plant and animal life, seepage, and garbage, that this poem evokes a glimmer of environmental criticism. The animal tracks that cover this page are ones that are seeping, dissolving into the gravel pit as the frost is sheen-slashed.

On the other hand, the traces of humanity—the tires, shirts, bags, jugs, and glass—are exhibited as near-permanent, since they won’t seep into the landscape like the traces of animals. The contrast between these images suggests a rebuking of a civilization that extracts and discards, and the rich natural scene in which animals and plants interact but without the introduction of near-permanent waste. The contrasting senses of presence and absence develop the notion that participants in the natural environment are just putting up with this human imposition by stepping beyond their note or sleeping through it, offering a silent, yet powerful criticism of waste and excess produced by resource extraction.