An Example Close Reading of “this half is for the ceremony” 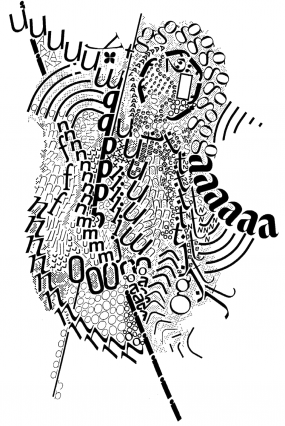 “this half is for the ceremony” by derek beaulieu (2007). Used with permission.

derek beaulieu’s visual poem this half is for the ceremony constructs a vague figure out of a textured mash-up of letters, numbers, and punctuation. The poem draws on the notion of dramatic and repetitive language use in ceremonies to offer a figure composed of repeated symbols that connect to religious expression and thought.

At first the figure seems to be both person and bird, with the human on the left side and bird on the right. This ambiguous figure is coupled with a sense of action through the directional slanting of forms towards the right-hand margin. The figure is also connected to a cross that runs through it, suggesting an iconic blending of Christian motifs of the dove of the Spirit and the cross.

That this figure might be seen as both person and dove and is attached to but also moving off of a cross, suggests this is an image of a transformational moment between bodily death on the cross and life as spirit, a moment of transcendence of material bounds. Through this image, this ambiguity might also offer a metaphorical lens for viewing the use of typographic materials in this poem as well. Many sacred figures are pictured, if not with wings like angels, as having multiple arms to indicate their many powers, or as riding on birds or other animals, again indicating their power. Lakshmi, the Hindu goddess of wealth, is sometimes depicted as riding on an owl. Thus, the ambiguity of the figure lends itself to a broader religious notion as well.

This religious image is also constructed through hints of ritualistic language (initially prompted by the title, but reflected in the repetitive, structured, and dramatic enactment of parts of language), suggesting that the representational practices of ceremony are directly related to constructing and interpreting the figure.

Yet this mystical moment is represented not through words, but through the non-semantic patterns, excesses, and ruptures of language. This rupture is most notably at both the centre of the cross and the middle of alphabet, breaking apart at a point of coherence. Thus, the poem draws into question the very language used in ceremony as reflecting a religious truth. It reformulates this practice to attempt to glimpse a mystical understanding that is beyond the limits of language in a transfigurative space of confused recognition.

This poem questions the ability of poetic and ritualistic language to represent the mysteries that they direct attention to, while also affirming that pushing through these limits gives a sense of understanding. In a sense, this half is for the ceremony enters into the mystery in the cloud of unknowing, where conceptions dissolve into hints of recognition.

At this point, one might ask, is this poem really about religion, or does it grapple more fundamentally with the limits of language to express mystery and wonder? By placing language (and a few numbers) into a non-symbolic relation, the poem suggests a representational movement beyond linguistic demarcations of truth to a shared sense of wonder and knowing that is both material and immaterial, while also being dramatic and playful.

Finally, this poem engages with a sense of community that is united by and rooted in language and shared values—and this does not have to be understood religiously. By opening up strategies of re-conceptualization and re-cognition within this domain, it interrogates the place of poetry and ritual within communities, undermining any sense of rigidity or clarity that may be espoused about them. Thus, this is a poem that is both religious and irreligious, cheeky and irreverent about assumptions of clarity and rigidity in a notably diverse group of communities called Christian surrounding a mystical figure, while remaining respectful of the mysteries that validate and bind these communities together.