Memory is a key theme in Joy Kogawa’s Obasan, and it is often connected to speech and silence in the novel. For example, Aunt Emily believes that it is important to remember the past and works hard not to let anyone, including her family, community, and the Canadian government, forget traumatic historical events. Obasan, in comparison, does not want to actively remember the past and tries to protect her niece and nephew from it by refusing to speak about it. The first two lines in the italicized passage in Kogawa’s novel, about the “silence that cannot speak” and the “silence that will not speak,” (n. pag., emphasis in original) suggest that while some individuals cannot speak about the past because it is too painful to recall, some choose not to speak about it for other reasons. Through her various characters and their responses to the trauma of being treated as enemy aliens in their own country, Kogawa draws attention to issues of individual and collective remembering. What are the histories and legacies that Kogawa wants her readers to understand and remember? How does she foster this remembering? A close reading of the novel’s opening can help furnish some answers. 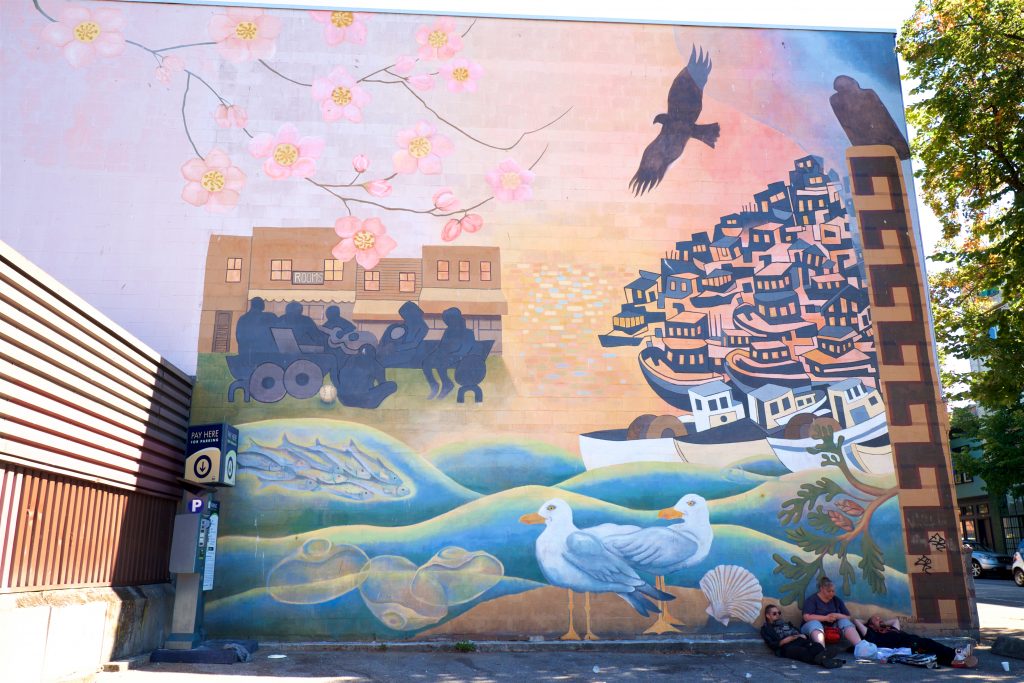 “Celebrating Community” mural at 315 Powell Street, Vancouver, BC, by artists Rita Buchwitz and Joey Mallett. Features fishing boats representative of the Japanese Canadians that lived in the neighborhood pre-WWII, as well as shells that are representative of a First Nations site at what is now CRAB Park. Part of the mural replicates an iconic photograph of boats confiscated from Japanese Canadian fishermen in Steveston, BC. Raymond Kam, 2017.

In the opening scene of Obasan, Naomi and her uncle are on their annual pilgrimage to a coulee. Uncle goes there with Naomi each year on (or around) August 9, the day that the US dropped the atomic bomb on Nagasaki. The first few lines of Chapter 1 are as follows: “The coulee is so still right now that if a match were to be lit, the flame would not waver. The tall grasses stand without quivering. The tops flop this way and that” (Kogawa 3). When Uncle points to the grass, “[t]he hill surface, as if responding to a command from [his] outstretched hand, undulates suddenly in a breeze, with ripple after ripple of grass shadows, rhythmical as ocean waves” (3). This description of the grass shadows indicates how, for Uncle, the coulee is “like the sea” (3). A fisherman before the forced relocation by the Canadian government, Uncle feels close to the ocean while on the coulee. When Naomi and her uncle reach the top of the slope, they “find the dip in the ground where he usually rests” and his “root-like fingers [poke] the grass flat in front of him” (3). Uncle’s comfort in this place, the way it responds to him, the way his body, even, seems a part of the coulee, highlights his connection to the land. We can read this scene as an assertion of Japanese Canadian presence in Canada, and a reminder of the long history of Japanese Canadians here.

In describing her uncle and the land around them, Naomi also gestures towards the history of Indigenous peoples on the land. For example, she mentions an “Indian buffalo jump” that was previously there and notes that Uncle could be Chief Sitting Bull, as he “has the same prairie-baked skin, the deep brown furrows like dry river beds creasing his cheeks” (4). She also mentions the likenesses between some of the Japanese and Indigenous students in her classroom (4). These parallels allow Kogawa to acknowledge the original inhabitants of the land alongside her point about the long history of Japanese Canadians in Canada; however, these parallels may also be problematic. We can think about how these specific descriptions—of Uncle, of Naomi’s Indigenous students—may draw on and reinforce stereotypes of Indigenous peoples.

Marie Lo suggests that when we analyze references to Indigenous people in Asian Canadian texts, we “[reconfigure] Asian immigration within a colonial settler history” (96). That is, we consider the position of Asian Canadians (and in this case, Japanese Canadians) in relation to Canada’s colonial history, its colonial present, and its ongoing injustices against Indigenous people. Reading the novel from this perspective reinforces its interest in diverse and complex histories in Canada, and in interrogating a Canadian collective memory that fails to incorporate the experiences of racialized and Indigenous peoples.