Scholarship at the Intersection of Indigenous and Diasporic Literature

In their 2005 collection of essays, Minor Transnationalisms, Francoise Lionnet and Shu-mei Shih explore the preoccupation they find in cultural studies with “vertical analysis” (11). What they observe is that cultural studies dedicates most of its time and attention to the relationships between dominant and non-dominant communities defined by significant imbalances in power, resources, or freedom, while rarely discussing relationships between non-dominant communities, or those communities that exist on the outside, on the margins, of the dominant culture.

Canada’s cultural “margins” are rarely considered together, and yet they have been at the centre of some of the largest public debates over Canadian literature. The controversial 1994 Writing Thru Race conference is an example. Held in Vancouver and hosted by groundbreaking authors including Roy Miki, Lillian Allen, Daniel David Moses, Larissa Lai, SKY Lee, Dionne Brand, and Lee Maracle, Writing Thru Race was intended to allow writers to gather and discuss their experiences as cultural producers in a predominantly white Canada. The conference became the source of public debate and, in some cases, fury, when organizers restricted certain events to authors and artists who identified as racial minorities. Larissa Lai, one of the authors who helped organize Writing Thru Race, describes how this decision divided the public, the Canadian Writer’s Union, and the Canadian parliament:

On the surface, the issue of contention was a conference policy limiting daytime events to self-identified First Nations writers and writers of colour. However, there were also public events attached to the conference open to anyone who wished to attend. This structuring, emerging from a social-justice-oriented politics of the body, was interpreted by some members of the Writers’ Union and some journalists as well, to suggest that Writing Thru Race was a conference that excluded whites. (1) 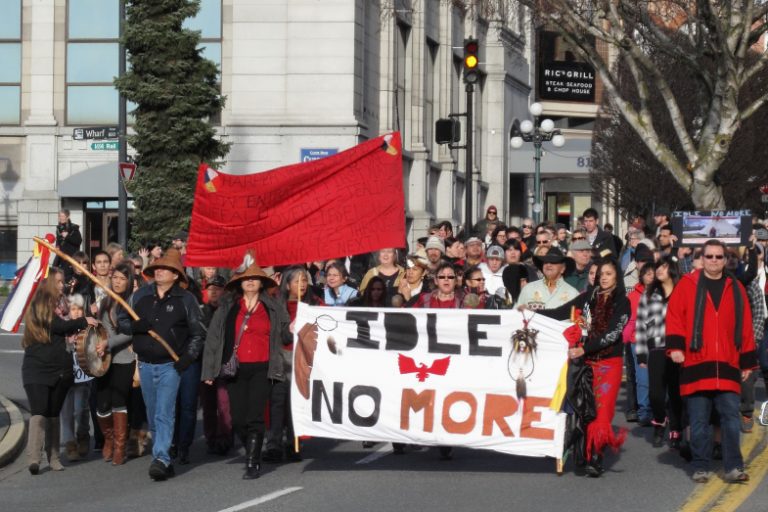 Idle No More protesters marching along Government Street [Victoria BC] in support of Indigenous sovereignty and environmental protection on December 21, 2012. r.a. paterson, CC BY-SA 2.0, via Wikimedia.

This controversy exposes a lot of lasting uncertainty about racism, belonging, and inclusivity in Canada. An article in the Globe and Mail denounced Writing Thru Race as “a nasty serving of cultural apartheid” (Valpy), and some funding agencies withdrew their financial support. In response, proponents of the conference argued that the furor Writing Thru Race inspired was precisely why racialized authors needed space to discuss writing, publishing, and creative labour without having to mediate discussion for white Canadians.

Writing Thru Race acknowledged that Indigenous and diasporic concerns do intersect in Canada. These intersections are further explored in Cultivating Canada: Reconciliation through the Lens of Cultural Diversity, an interdisciplinary essay collection about the role non-Indigenous, racialized minorities can play in reconciliation. Cultivating Canada was published by the Aboriginal Healing Foundation and funded in part through the Indian Residential School Settlement Agreement. Ashok Mathur, the work’s Bhopal-born editor, notes that narratives of migrating to Canada—starting a new life in a new land, starting with a clean slate, for example—subtly discourage immigrants from identifying with (or thinking about) Canada’s Indigenous peoples. Instead of seeing it as tabula rasa for contemporary immigrants, Mathur suggests the nation is better understood as “a geographic palimpsest, a land whose history was always alluded to by the tracings and markings that, however obscured or willfully ignored can never be erased. This is the land we came to, not a terra nullius but a land weighted by official and unofficial histories, some of which new immigrants are made to understand quite well, and others which remained and remain un-interrogated” (3).

The collection argues that non-white Canadians should be included in discussions of reconciliation, treaty citizenship, and socioeconomic inequalities that divide Canada’s Indigenous and non-Indigenous communities.

Cultivating Canada and Writing Thru Race remind us to look for complexity and nuance when we place Indigenous and diasporic texts in dialogue, and to explain what these subtle differences demonstrate: for example, do diasporic Canadians perpetuate the colonization of Indigenous lands in Canada? Using literary analysis to answer questions like this requires scholars to rely on close reading and be aware of how personal experience will shape literary analysis (for more guidance on effective and focused close reading skills, please visit the “Close Reading Poetry” and “Close Reading Prose” guides on this site).