“Shawnandithit (Last of the Beothuks)” by Joan Crate

Shawnandithit (ca. 1801–1829) was the last of the Beothuk peoples of what is now called Newfoundland. Her people suffered from disease, loss of land, and starvation due to the colonization of their territory. In March 1823, an English trapper captured her, her mother, and her sister. They were taken to St. John’s, where her mother and sister died of tuberculosis after an unsuccessful attempt to return them to their people. Shawnandithit was renamed “Nancy April” and lived with a number of colonist households, learning some English and drawing, through which she shared much about her peoples. She died in St. John’s from tuberculosis on 6 June 1829. See Pastore and Story for a more elaborate biography. 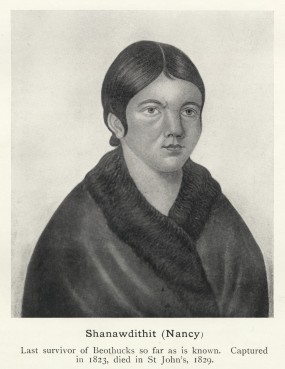 Shawnandithit’s name was spelled in a number of different ways, but the one Crate uses for this poem is one used by her colonial documenters (Sparke 6), rather than the contemporary usage found in Pastore and Story’s biography.

Crate’s poem provides a personal perspective on Shawnandithit’s story, a story that is only known through colonial records and her drawings. While colonists purportedly saved her by bringing her into British settler society, Crate dampens that sense of salvation with references to Shawnandithit’s illness and death. Importantly, this deathly imagery is juxtaposed with colonial agendas to document, textualize, and illustrate Shawnandithit’s experiences and Beothuk language at the point of extinction.

Shawnandithit (Last of the Beothuks) by Joan Crate

White handkerchief to your mouth, Shawnandithit,
white as your mother’s fingertips, that expanding
spot on your sister’s cheek the day they came
and took you three as you wandered hungry,
your white ribs hooking the lifeless ice.

Except for the blood
white as death.

Who could have imagined you’d be taken
to a house in town with a fire and embroidered linen
to spit into. Who would have thought death was warm
and plump with meat and men who smile too much,
who ask questions with pencils, wanting
you to draw the canoes, the tents, the chasms
dug for the winter houses. They ask you to speak
your language so they can study its sound.
How full of holes it is, subterranean tunnels
echo around your failing lungs.
Can they hear?
Warm blood in your mouth tastes ripe
as a lover, everything gone.

And so Shawnandithit, with Mother and sister dead
and none of your people left beating against winter,
it is your turn, the last Beothuk, broken
and barren, beautiful as loose feathers on stone.
In the whitemen’s steaming kitchen, you falter, look
to the wall, the clock you can’t read, then sketch
them stories of lingering death, marriage ceremonies
and hunting parties, love, and your lingering death.