Textualized orature is a kind of translation. The cliché in translation studies is that something is always lost in translation, but without translation many great works would be inaccessible. Works of literature become meaningful in specific social, cultural, and linguistic contexts. Translation requires remediation, which means that all translations have to adapt the stories to resonate with a new context. 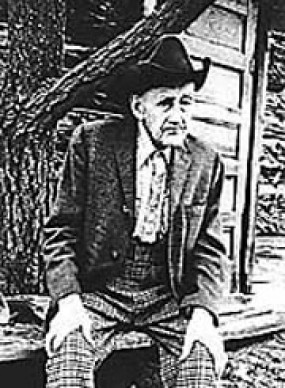 Ethical issues can arise when capturing the stories of elders and storytellers in English text. Textualized orature has to capture the sense and spirit of the storyteller as well as addressing issues of translation. For example, in her introduction to Okanagan storyteller Harry Robinson, Wendy Wickwire notes the layers of translation necessary for the project to be undertaken respectfully. While Robinson is multi-lingual, he began telling his stories in English to native and non-native audiences as a way to keep the stories alive in his community (15). While the text is given in English, it is important that Robinson spoke English and eagerly consented to have his stories recorded for posterity in English. Secondly, Wickwire had to capture the sense of Robinson’s nuanced oral presentational style in text, meaning that she had to try to capture in writing “the emphasis on certain phrases, intentional repetition, dramatic rhythms and pauses” (16). According to Wickwire, Robinson’s stories “are really preformed events, rather than fixed objects on a page, and are conveyed much better by short lines than by the standard short story prose style, in which line breaks are only a typographical convention” (16).

Using multimedia and multiple languages can help ease the problem of textualizing orature. For example, a team of scholars and researchers at the University of Winnipeg created a textual collection of scholar and storyteller Louis Bird’s stories to capture Omushkegowak, or “Swampy Cree.” Bird worked as an editor, storyteller, and writer on the Omushkego Oral History Project, which features an online anthology of his stories with voice recordings in Cree and English. The project also includes some video capture of Bird telling stories and storytelling lessons for K-8 students in Cree and English.

As Kevin McNeilly discusses in an opinion piece for the Canadian Literature special issue First Nations Writing, translations raise many issues around cultural interaction, such as questions of appropriation of voice and of illusions of authenticity and accuracy. Good translations of orature seek to stage an encounter rather than provide means for appropriation. The challenge of translation involves moving text and ideas that are embedded in the culture and context of one language into the ideas of another language. When this happens you will always get what J. Edward Chamberlin calls untranslatability, or words and ideas that can be roughly translated but whose most important quality is that they resist literal or direct translation (14). This is one of the reasons that translators will frequently leave Indigenous words in a translation even when there is a similar word in English. Because some words are connected to a specific web of ideas, changing them into English will alter the concept and destroy the nuance.

For George Woodcock, translating involves “an intricate adjustment … to find English words that will convey the spirit of a work and clothe its structure as adequately as the original words had done, a process that, given the various ways languages work, may necessitate notable departures from the literal” (72-73). The translator adjusts the text to offer “a convincing verbal echo” (73). Due to the complex nature of literary works, developing a translation for a literal statement in one language may require figurative configurations in another. 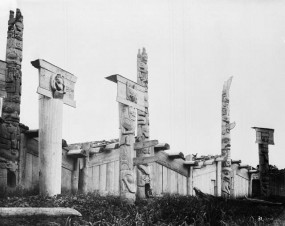 Houses and carved posts in the Skedans village, Haida Gwaii, 18 July 1878. Stories of each family were told in the house posts. G.M. Dawson, Library and Archives Canada: PA-038148

Robert Bringhurst takes on the difficult task of translating textualized orature to present Haida stories as great poetry. In contrast, the original story transcribers were anthropologists interested primarily in language documentation, and thus they stressed linguistic accuracy over aesthetic concerns. Kevin McNeilly summarizes Bringhurst as arguing that “translation … must be responsive to the shifts in substance that occurs between contexts, languages, or, really, materials” (171). McNeilly explores Bringhurst’s attempts to do just that and make explicit the challenges and limits of translation within his texts:

Bringhurst produces poems that attend texturally, rhythmically and structurally to the pressures of an unfamiliar and uncomfortable ethos. That discomfort, however, is not a flaw but a necessary condition of the poetic, particularly of a writing that wants an ethical relation to what is otherwise than itself. For example, we might pay attention to how Bringhurst editorializes, cutting commentary through his translations to explain or to elaborate; the effect is intrusive, but not a gesture of control. Rather, he makes his presence explicit, and reminds us through the devices of critical asides and even the footnote, that these texts are not trying to pass themselves off as authentic, as transparent windows into the Haida world, but that they are versions, reconstructions, approaches. We never mistake Bringhurst’s voice for an “accurate” rendition of Skaay: he won’t let us, and rightly so. What we feel, instead, are the pressures exerted on that voice by an outside, and the inflections and tugs of a language that won’t resolve itself, easily, into English. (172)

These textual strategies and tensions within the language illustrate how Bringhurst navigates the translator’s task of reconstructing and approaching a text while remaining an explicit presence both within and outside of the text. Despite his obvious devotion translating Haida oral stories so as highlight their beauty, Bringhurst has been criticized for failing to ask permission to undertake the translations from the traditional owners of the stories or the contemporary Haida Nation (for more, see Bradley).