A Note on Indigenous Terminology

Respectful critical engagement with literary works necessitates being aware of our own assumptions tied to our social and cultural position, and to work across the boundaries that seem to divide different groups, knowledges, and experiences. Assumptions about differences often support essentialist thinking that reduces people and their experiences to stereotypes and singular characteristics. 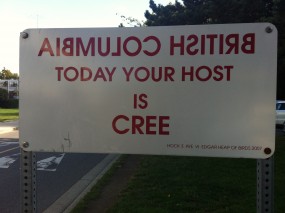 Non-indigenous critics, and Indigenous critics from other cultural backgrounds than those they work with, can work as allies to affirm a diversity of Indigenous voices by engaging specifically with the cultural, social, political, and personal influences that particular authors draw on. This criticism seeks to better reflect the literary, cultural, and social work of a given author and text, and to engage in a knowledgeable dialogue with it. Without this self-critical engagement or positioning, critics run the risk of reverting to colonial stereotypes and ideas that sustain the oppression of the plurality of Indigenous voices rather than to affirm them.

Importantly, all these terms and considerations discussed here raise the question of who speaks for whom. For instance, some Indigenous people may self-identify as Indian—for any of a number of reasons, including to deliberately signal their construction under colonial law. However, for the majority of voices in the broader critical conversation, it is best to be aware of one’s position and to speak respectfully from it.

The following list of terms addresses different usages and their historical significance. While we use the term Indigenous in this chapter, which terms should you use when speaking and writing about Indigenous peoples and literatures? To respect the peoples, cultures, and histories you engage with, use the terms that people prefer for themselves, and choose the most specific term if you know it. For example, Eden Robinson identifies herself specifically as a Haisla-Heiltsuk writer. Likewise, Mourning Dove (1882?–1936), while often discussed as a Native American writer because she was born and lived in the USA, in fact “always referred to herself as an Okanogan” (Brown 259), an Indigenous nation that spans the Canada-US border. The diversity of Indigenous heritages that inform these works is also why we refer to the group of texts in the plural as literatures.

As well, individuals do not always fit into the available social categories: labels can be problematic. In “Real” Indians and Others: Mixed-Blood Urban Native Peoples and Indigenous Nationhood, Bonita Lawrence discusses these issues in more depth, in particular the complex ways in which peoples of mixed Indigenous descent negotiate their identities in Canadian cities. Lawrence argues that, for some academics, Indigenous identity was understood as being counter to modernity and in terms of primordiality (1). In order to assert their Indigenous rights, Indigenous peoples are often literally put on trial to account for their supposed authentic Indigeneity or primordiality. Lawrence points out that in Canada, the Indian Act’s legislation of the definitions of Indigenous identity necessitates the policing of Indigenous identity by people in both Indigenous and non-Indigenous communities. This need to demarcate boundaries creates complex issues and conflicts, raising questions about the rights of peoples of mixed ancestry and fears of appropriation of Indigenous identity. As Lawrence argues,

The question of who is an Indian, which lurks beneath the surface of many of the issues that contemporary Native communities are struggling with, is much larger than that of personal or even group identity—it goes directly to the heart of the colonization process and to the genocidal policies of settler governments across the Americas toward Indigenous peoples. (16)

Lawrence aims to understand how Indigenous peoples of mixed descent living in the city, away from reserves, complicates the legislated and discursive boundaries of Indigenous identity.

Finally, it is important to note that there is no right or wrong way for individuals to identify themselves. The terminology an Indigenous person uses to describe herself is a personal choice that can carry important political implications. As Lawrence states, “identity … is far more complex than any neat categories can suggest” (11).

Scholars and writers sometimes use the older terms Indian, Eskimo, and Native (as in Parker Duchemin’s work on Mackenzie), either because these reflect the general terms used during the writer’s or scholar’s time-period, or to emphasize the derogatory nature of the term in question. Writers and critics should be aware of the history and assumptions which accompany their language choices.

As you can see, most of these terms have undergone significant revisions over time, and in all likelihood, these terms will continue to shift in the coming decades. These changes reflect attempts to develop a culture of respect for Indigenous peoples in Canada. UBC’s Indigenous Foundations website has more detailed discussions on the complex histories of these terms and Indigenous identity.