Print or
Save as PDF
Please Note: If you are using Mozilla Firefox, the PDF created using the above button will contain unusable links. Please use Chrome or Safari to create PDFs with working links.
Tell us what you think!
Indigenous Literatures Literary Theory

An Introduction to Indigenous Literatures in Canada 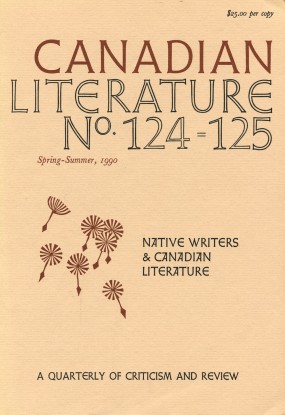 In Canadian Literature’s groundbreaking 1990 special issue, Native Writers & Canadian Writing, W. H. New argues in his editorial that “Power declares; it doesn’t readily listen” (4). At the time, Canadian Literature still represented the power of the Canadian literary establishment, but for this issue the journal attempted to critically listen and engage with Indigenous writers, rather than speak over them. By implication, this shift also means the journal asked its readership to become willing listeners about Indigenous literature, in all its contradictions and complications.

The special issue was, according to New, both a “speaking-place” and “a series of opportunities to begin listening” (8). Listening was essential since, as New put it,

The time is not so distant when the ‘Native’ was a conventional figure in Canadian literature—but not a voice (or a figure allowed separate voices). (4)

As New implied, thinking of Indigenous characters and writers as having their own complicated and nuanced voices was something that might be difficult for some readers, but in order to listen to Indigenous voices one first has to let them speak.

A decade later, Canadian Literature editor Margery Fee wrote in an editorial for a special issue, First Nations Writing, about the response to the 1990 Oka Crisis, a land dispute between the town of Oka, Quebec, and a local Mohawk community. Fee notes a tendency in Canadian political and cultural discussions to read incidents like Oka

not for what it might say about the aspirations, desires, or political demands of the Aboriginal people involved, but for what it says about relations between the two solitudes. Attention is paid, but for the wrong reasons, and in the end, the Aboriginal protagonists go to jail, or worse, and the mainstream media forgets the whole subject. Did we ever find out what happened to that golf course? (5)

Paying attention to the aspirations, desires, or political demands of Indigenous people involves listening to those demands. Likewise, paying attention to Indigenous literature and culture for the right reasons involves learning about, and engaging with, the way that these texts speak to the aspirations, desires, and political demands of Indigenous peoples.

It is important to notice two things about terminology in New’s and Fee’s editorials. The first is the shift in terms. New uses the term Native, Fee uses the term First Nations/Aboriginal, and our guide uses the term Indigenous (as does the issue 215 of Canadian Literature, a special issue entitled Indigenous Focus). Each of these terms has a politics of usage surrounding it, which is discussed further in “A Note on Indigenous Terminology and Criticism.” The second thing to notice is the focus on attention. To write a special issue about Native, First Nations, or Indigenous literature and culture is to devote a special kind of attention to the subject. It is a way of saying that this subject, this history, and these people are important, and that Canadian Literature, the journal, thinks that people who want to pay careful, close attention to Canadian literature ought to pay attention to Indigenous writing as well. To pick up on Fee’s terms, by paying attention to Indigenous voices, we are saying that their aspirations, hopes, and political demands matter to the study of Canadian literature. 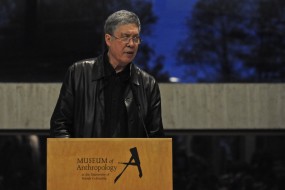 Finally, it is helpful to remember Thomas King’s emphasis on the importance of storytelling as a transformational process. In his 2003 Massey Lecture for the CBC, King teaches, “The truth about stories is that’s all we are” (2). Our history is made up of stories, and the stories we tell, and pay attention to, shape how we understand our world. This is why reading, listening to, and critiquing Indigenous stories are so important. Telling stories about, by, and for Indigenous people is a way of making up a new cultural reality for Indigenous people and their culture. As King further argues, “Stories are wondrous things. And they are dangerous” (9). Stories can transform a culture, but they can also destroy one. Many of the foundational ideologies of colonization were stories about what kinds of people Indigenous peoples are, and these stories were nothing more than destructive fictions.

At the end of each lecture, King comes back to the responsibility of the audience, both Indigenous and non-Indigenous, to take the story that King has just given to them and do with it what they will. For King, the key to ethical listening seems to be doing something with the stories we are told, and the idea underlying his lectures is that hearing a narrative ought to be transformational in some way. Stories create the potential for people to live their lives differently than the way they did before they heard the story.