Since this poem takes up several pages, it is included here as a link to a PDF, unlike the other poems in this chapter. Before continuing, read through Jordan Abel’s short visual-prose poem, “The silhouette of a pole on the shore of the Nass River.”

The passage from Barbeau’s book that begins Abel’s poem focuses on a totem pole on the Nass River, in the territory of Abel’s Nisga’a ancestors. This poem engages with Barbeau’s ethnographic view of Abel’s own community. Through this blending of perspectives and motivations, Abel blurs the lines between the ethnographic subject and its supposedly objective observer.

The title of the poem, however, also offers a glimpse of Abel’s conscious engagement with the colonial and ethnographic ideas that limited Barbeau’s writings. The title emphasizes a silhouette rather than a detailed description of the totem pole, suggesting that Barbeau did not fully understand what he was seeing. Furthermore, Abel hints at Barbeau’s limited engagement with the richness of the Nisga’a community due to his fixation on a singular material object. 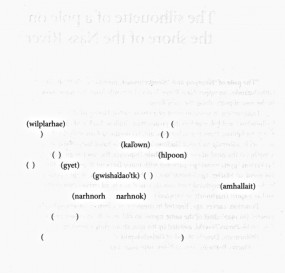 Abel uses erasure strategically to reinterpret Barbeau’s rigid prose. Abel erases all the English language text first, leaving only the Nisga’a words, and then washes them away too, leaving only brackets, rippling on the page like the river beside the silhouette of the pole. Note that in print, the first and fourth pages bleed through the paper (see Figure 1), offering hints or ghosts of the obliterated terms, heightening the impression of erasure.

However, Abel then reconstructs a single sentence, glimpsed and pieced together from a series of parenthetical insertions, that offers, perhaps, an ethnographic observation: “field / process wherein / language readjusts to / casualty // a description of / all” (14). While fragmented and somewhat incoherent, this scattering of words may suggest how language readjusts in the inter-cultural space of ethnography, which may cause descriptive “casualt[ies]” through its limitations.

The final page of the poem returns to coherent prose, filling in the blanks of the previous page, and tells of a scene involving the totem pole, Barbeau’s notebook, and his Nisga’a “informant” Dennis Wood, who taught him about the pole. The word “informant” is no longer in favour with many anthropologists, as it reduces Indigenous collaborators to fact providers, although without their work and cooperation, no anthropologist could have produced anything at all.

The first page of the poem produces the style of an ethnographic report. The last page tells of the human relationships and emotions that these reports never mention. The distance between these two styles marks one of the ways in which scientific writing reduces human beings to objects of study.