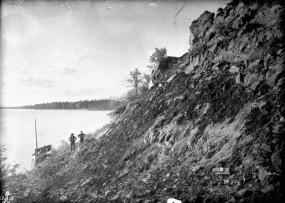 The title of the poem signals the particular connection between Treaty 8 and settlement and resource extraction. Treaty 8 covers much of northern Alberta and parts of northeastern British Columbia, Saskatchewan, and the Northwest Territories. As Dennis F. K. Madill reports,

The overriding factor of the government’s decision to negotiate Treaty Eight involved economic considerations, not humanitarian or ideological concern for the Indians of the Peace River-Athabaska region. (71)

Bands from the Nîhithaw (Cree), Dene, Dene-zaa, and other First Nations signed the treaty during its implementation between 1899 and 1914.

As Rhodes notes, the region Treaty 8 covers is now the site of Canada’s tar sands strip mines. Rhodes points out in his footnote that he sculpted language from the treaty to resemble the form of the hydrocarbon compound coronene, associated with the tar sands. Rhodes’ rearrangement of Treaty 8 defamiliarizes the document to call attention to alternate understandings of the original text in relation to the motivations of its creators and its ongoing relevance to resource extraction. 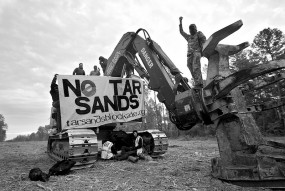 Many of the words in the poem repeat or mirror off each other, highlighting aspects of the treaties, such as promises of education. Similarly, the language is often broken or bent to meet the needs of oil extraction. Perhaps this transformation of treaty language suggests that treaties can be twisted to the interests of resource extraction, no matter the promises made. Or perhaps the poem is suggesting the treaty was always constructed to meet the changing needs of resource development rather than to support settler and Indigenous communities equally. By linking the treaty document to the tar sands in this way, Rhodes suggests a governmental legacy of privileging resources over humanitarian concerns.