Print or
Save as PDF
Please Note: If you are using Mozilla Firefox, the PDF created using the above button will contain unusable links. Please use Chrome or Safari to create PDFs with working links.
Tell us what you think!
Authors Indigenous Literatures Literary Works Poetry Visual Poetry 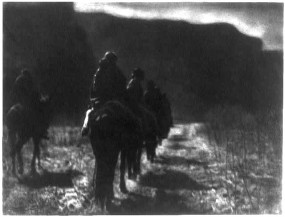 The vanishing race — Navaho (1904) by Edward S. Curtis, visualizing and propagating his belief in the vanishing Indian. Consider Thomas King’s discussion of Curtis in the chapter You’re Not The Indian I Had in Mind in his book The Truth About Stories. Library of Congress, LC-USZ62-37340

Rhodes’ poems engage with the treaties and land disputes involved in the colonization of Canada. His poems open up for consideration governmental policies that attempted to erase Indigenous peoples from the land through displacement and containment. Abel’s poem focuses on the ethnographic documentation of Indigenous peoples, in particular attending to the colonial trope of the vanishing Indian—the belief that Indigenous peoples lost their cultural distinctiveness through interactions with Western culture.

Both the settler policies and ethnographic agendas these poems address were grounded in the colonial ideal of progress, which sought to assimilate Indigenous people on the presumption that Western culture was superior to all others. For more on colonial history and its impact on Indigenous peoples, see “An Introduction to Indigenous Literatures in Canada” and “Orature and Literature.”

Through their visual interactions with colonizing documents, Rhodes and Abel call for a reconsideration of the colonial assumptions that informed settler-Indigenous relations in the past and which continue to inform the present.

As with all visual poems, to understand these works, one must both look at and read them carefully. Pay careful attention to what both the visual and verbal elements contribute, as well as how they relate to broader contexts. For help with how to read and write about visual poetry, see the short guide to Poetic Visuality and Experimentation.