Print or
Save as PDF
Please Note: If you are using Mozilla Firefox, the PDF created using the above button will contain unusable links. Please use Chrome or Safari to create PDFs with working links.
Tell us what you think!
Case Studies Fiction Gender & Sexuality Literary Works

Mrs. Wilson gauges in her fiction the many ways by which human contact is broken—through guilt, shyness, fear, jealousy, will to power, hate. The recurrent drama in her novels and stories is the withdrawal from familiar surroundings of the central character who sets out on a lonely quest of self-discovery. 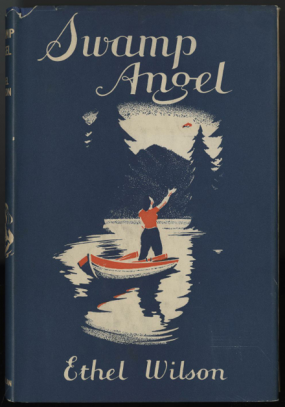 Considered one of Wilson’s most accomplished works, Swamp Angel follows Maggie Vardoe (later Lloyd) as she flees her husband in Vancouver to help run a fishing lodge in the interior of British Columbia. The novel illustrates the tension between her personal autonomy as a woman, and the needs and perceptions of a largely heteronormative community. Through the transformations of the main character, we can observe a process of attaining personal agency and self-actualization in the midst of societal constraints. Maggie’s navigation of the personal, social, and cultural implications of her actions offers a feminist critique of women’s role in marriage at a time when divorce was condemned, and women had few options to work outside the home.

Other notable characters in the novel include her friend, Nell Severance, a former circus juggler, and her daughter Hilda. Nell’s act was to juggle pistols, and the “Swamp Angel” is the name of Nell’s favorite gun. It symbolizes how some use such objects to dominate or kill, while others can transform them into beauty and pleasure. Wilson explores the ways in which human beings make themselves and others happy or miserable, and sees compassion as a necessary but not always effective response to the suffering of others.