“Circle the Wagons: In Ink: mediatation on Treaty Two” by Shane Rhodes

This poem engages with Treaty 2, which was signed between the Crown and First Nations in southwest Manitoba and southeast Saskatchewan in 1871. This treaty designated large tracts of land for settlement and promised the Nēhiyawēwin (Cree) and Dene (Chippewa) peoples in the region land and support in making the difficult transition from buffalo hunting to farming. Because of the over-hunting of the buffalo to supply the Hudson’s Bay Company’s fur trade, starvation was widespread. 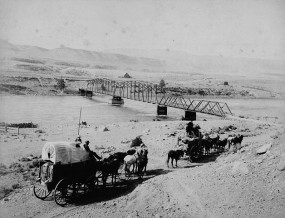 While distributing the land to colonists, Treaty 2 also provided a system of control in the face of fears of Indigenous rebellions. In the words of one of the developers and signatories of the treaty, Alexander Morris,

the Canadian system of band reserves has a tendency to diminish the offensive strength of the Indian tribes, should they ever become restless, a remote contingency, if the treaties are carefully observed. (qtd. in Daugherty n. pag.)

Therefore, Treaty 2 strategically cut Indigenous peoples off from each other and from settlers by confining them to specific reserve lands. The people were confined to the reserves by an unlegislated (not legally instantiated) pass system: after 1886 and until the 1940s, anyone who wished to enter or leave the reserve needed a pass signed by the Indian agent, in order to control the exchange of goods. The passes specified where people could go, when they could leave, and when they had to return, thereby policing the movements of every Indigenous person in the region (Nestor n. pag.).

The context of Treaty 2 helps illuminate Rhodes’ choice of title. Circling the wagons is a popular idiom that means to take a defensive position. The expression is based on the belief that settler caravans circled to defend themselves against attacking Indigenous peoples. Although this belief may be based more on settler fears about Indigenous peoples than in reality, the image of circling wagons is perpetuated in popular Western films such as The Searchers (1956) and The Unforgiven (1992). The poem’s title and circular shape is a subversive commentary on the colonial protectionism of Treaty 2.

Circle the Wagons: In Ink: mediatation on Treaty Two by Shane Rhodes 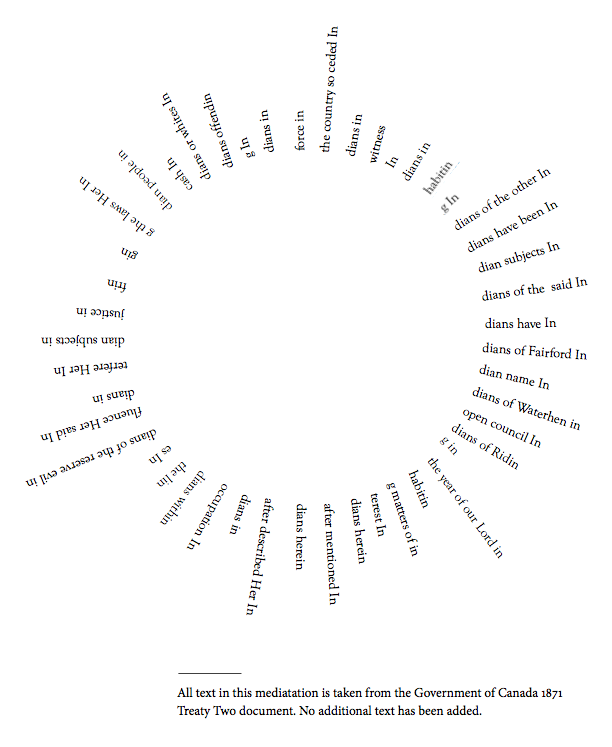