“Soundscape as Landscape #1: Peaceful, Unified, and Unarmed” by Shane Rhodes 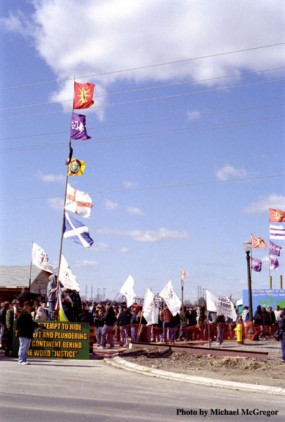 Entrance to the disputed land in Caledonia on the afternoon of 15 October 2006. Michael McGregor CC 2.0, Wikimedia Commons

This poem offers a particular challenge to a reader, since it does not include any words except those in a footnote. However, “Soundscape as Landscape #1” still falls within the tradition of visual poetry because it works to visualize and document alternative perspectives to those presented in the original source. In this poem, the relationships between the title, the footnote, and image are especially significant.

The poem is also somewhat different from Rhodes’ other poems in this chapter, since it engages with events from the recent past and does not focus on colonial treaty documents. Nonetheless, it is related to the other poems because it reflects a land dispute including a protest and occupation by the Six Nations (also called the Iroquois or the Haudenosaunee: Mohawk, Oneida, Cayuga, Seneca, Onondaga, and Tuscarora) of a development near Caledonia, Ontario, following on a history of failed negotiations regarding the land. This event is now referred to as the “Grand River land dispute.”

As Rhodes notes, on 20 April 2006, protestors blocked the road to the development in response to previous arrests of Six Nations’ demonstrators. “Soundscape as Landscape #1” documents this moment in the land dispute. For more information on this land dispute and its connection to provincial and federal responsibility with land transactions, see Graham Darling’s helpful article on “Land Claims and the Six Nations in Caledonia Ontario.”

Soundscape as Landscape #1: Peaceful, Unified, and Unarmed by Shane Rhodes