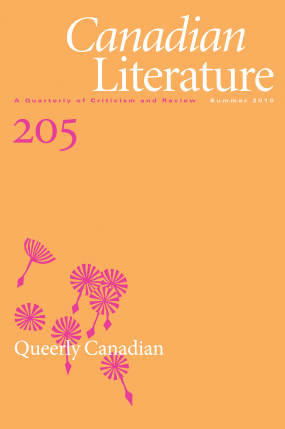 On its face, queerness may not seem to have much to do with Canada, or Canadian literature. In an editorial for a special issue of Canadian Literature, gender studies scholar Janice Stewart discusses the Queerly Canadian conference that was held at the University of British Columbia in June of 2009. She notes that the conference “foregrounded an interdisciplinary body of scholarship that critically rethinks modernist discourses located at the nexus of Canadian nationalism and critical considerations of sexualities and genders in their multiple configurations” (7). The emphasis on the multiple in Stewart’s prose is characteristic of queer theory. Queer theorists like to deconstruct and pluralize binary thinking about sex, gender, and desire. Singular sexuality and gender, for queer theorists, are best understood as plural sexualities and genders. For queer theorists, the binary between men and women, gay and straight, are too limiting. They would instead speak of ways of being women, men, gay, or straight. These plural sexualities and genders have multiple configurations, and these configurations are historically and locally specific. The work Stewart discusses does not come from one department or critical school, but it is an interdisciplinary body of scholarship that comes into existence through collaboration between scholars.

For Stewart, the two key terms of the discussion, queer and Canadian, modify each other, producing a scholarly tension that can allow us to rethink what it means to be Canadian and what it means to be queer within Canada. But the idea of queerly Canadian also offers Canadian Studies scholars the opportunity to rethink the marginality of queer people within Canada. What happens when scholars move away from discussing what is clearly Canadian to ask what is queerly Canadian? Can we rethink the nation with queer people at its centre rather than being at the margins? How might our idea of what it means to be Canadian shift if queerness is placed at the centre of Canadian identity? Such questions can produce critical resistance and can unsettle binary thinking about gender, sexuality, and the nation. One of the things that scholars notice right away by asking questions like these is that the resistance to queering Canada shows the extent to which heteronormativity is at the nexus of Canadian identity. 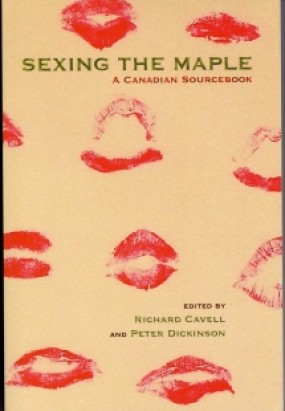 Queering Canada is now an important critical practice within the study of Canadian literature and culture, with books such as Terry Goldie’s Pink Snow (2003) and Richard Cavell and Peter Dickinson’s Sexing the Maple (2006) encouraging scholars to reconsider Canadian literature, and Canadian national identity, from a queer perspective. These scholars ask us to consider what happens when we queer the Canadian imagined community. They draw attention to how the stories we tell about who is, and is not, a Canadian may construct the imagined community as implicitly heteronormative.