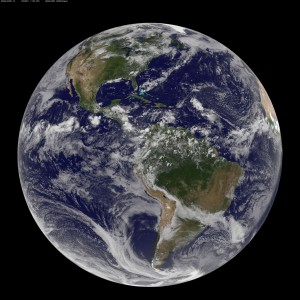 Discussing nationalism in terms of globalization troubles and broadens simplistic notions of place.

A global perspective focuses on groups with shared interests that form affinity networks beyond national borders, such as global Indigenous movements and international associations that address educational and economic inequalities, human rights violations, and so forth.

Likewise, environmental issues often move beyond a single region through concerns, for instance, with climate change and disease pandemics, for example in Margaret Atwood’s novel Oryx and Crake, or Vincent Lam’s story Contact Tracing in Bloodletting and Miraculous Cures.

Globalization further prompts us to think carefully about what makes a home or a community, and how global travel and movement might alter that concept. 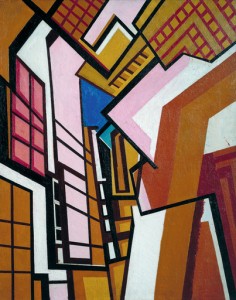 Wyndham Lewis was a Canadian-born British painter who worked as a war artist for the Canadian government.
Workshop by Wyndham Lewis (1914). Photo: Tate, London 2012, T01931.

For instance, the German and Latin American magic realist movements in the 1920s and late 1960s influenced Canadian writers like Jack Hodgins, Michael Ondaatje, and Leon Rooke. Similarly, in poetry, aside from the Eurocentric yet notably cosmopolitan Modernist movement, other international, and influential changes include the impact of the ancient Arabic poetic form of the ghazal on Modernist writers, such as Phyllis Webb, P. K. Page, and Lorna Crozier.

Looking closer to Canada, interactions between American and Canadian writers have had an impact on many literary movements, such as the connections in the 1960s between the Black Mountain poets such as Charles Olson and Robert Creeley with the Vancouver-based TISH poets like Fred Wah, George Bowering, Daphne Marlatt, and Frank Davey. Inversely, Canadians abroad like Mavis Gallant and Brion Gysin remain important contributors to the arts, even while many readers might not realize they’re Canadian.

Attention to places outside of Canada also extends to how they are represented in literature. For instance, in his article Greetings From Bangalore, Saskatchewan, Ven Begamudré observes that,

[Rohinton Mistry’s] short-story collection Tales from Firozsha Baag marked a turning point in Canadian literature precisely because most of it is not set in Canada. Without meaning to, he gave other writers of our generation permission: not to write about Canada yet be Canadian writers. (11)

Broad global connections between people, places, ideas, and interests break the limits of a nationalist perspective by showing how contemporary Canadian society—and its literature—reflects a global network of meanings and cultures.

So, how do questions of globalization link to post-nationalism? Is Canada a post-national nation? Can such a paradox exist? In his book Post-National Arguments: The Politics of the Anglophone-Canadian Novel Since 1967 (1993), Frank Davey defines contemporary Canada as:

a post-national state—a state invisible to its citizens, indistinguishable from its fellow, maintained by invisible political forces, and significant mainly through its position within the grid of world-class postcard cities…. Specific novels may argue for a humanist Canada, a more feminist Canada, a more sophisticated and worldly Canada, an individualist Canada, a Canada more responsive to the values of its [A]boriginal citizens, but collectively they suggest a world and a nation in which social structures no longer link regions or communities, political process is doubted, and individual alienation has become normal. (266)