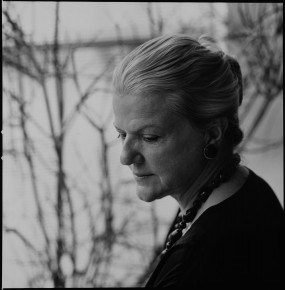 Doris Anderson, CC (1921-2007) was a Canadian journalist, author, and women’s rights activist. She served as Editor of Chatelaine from 1957-1977, and oversaw the radical reimagining of the women’s magazine in Canaada. Barbara Woodley. Labatt Breweries of Canada. Library and Archives Canada, 1993-234 NPC.

The 1950s saw a radical shift in public discourse concerning women in Canada. Chatelaine, under the editorship of Doris Anderson, became instrumental in bringing the arguments and ideas of second-wave feminism into the homes of Canadian women. Such a move was a major pivot for the widely read women’s magazine, which previously published articles that seemed to affirm a patriarchal family structure—including a 1939 article titled “Men Don’t Want Clever Wives” (Moss and Sugars 14). Even before Anderson, Chatelaine began to publish more socially provocative articles on women’s rights and contraception in response to women’s changing roles in a post-war society. Articles such as “The Pill That Could Shake The World” (1953), and “Makeover for a Working Wife” (1956) appeared in the magazine during this time. This is not to say that Chatelaine became a radical feminist publication. As Moss and Sugars note, Chatelaine still published regressive articles that continued to affirm social standards geared toward producing submissive wives (14). These articles were not subtle and had titles like “Don’t Educate Your Daughter” (1954). It is easy, when discussing feminism in Canada, to focus exclusively on high or canonical literature. Popular magazines, however, played an important part in getting the message out, even if they did so as a means of increasing their readership. The socially progressive leanings of Chatelaine matter because they represent a concrete example of how feminist ideas pollinated into Canadian homes.

Under Anderson’s editorship from 1957 to 1972, Chatelaine published articles on sex, contraception, and women’s role in the public sphere. According to Anderson, her new editorial direction produced a backlash, and some writers wondered if it represented a feminist coup that turned “a nice wholesome Canadian magazine into a feminist rag” (Anderson 151). The backlash against feminist publishing helps to explain why so few mainstream, mass-market magazines explore feminist topics. Editors are often scared that being seen as too feminist will cost their journal readers and advertisers.

During Anderson’s editorship, Chatelaine contributed greatly to public discourse supporting the Royal Commission on the Status of Women, as well as social justice issues surrounding racism and the treatment of Canada’s Indigenous peoples. With a readership of 1.6 million Canadian women by the end of the 1950s (Moss and Sugars 14), Chatelaine played an important role in promoting women’s rights across Canada. As Anderson put it, she wanted to give Canadian women “something serious to think about, something to shake them up” (151), and Chatelaine provided that material.