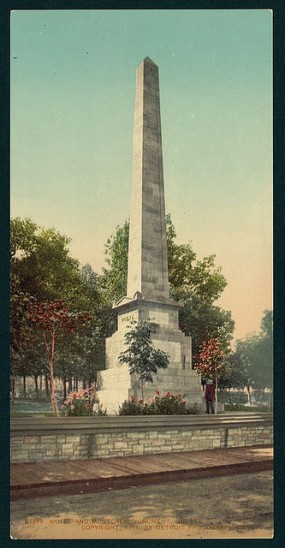 Since Canada began as a colony, first of France and then of Britain, its governing structures have been informed and shaped by the European conception of the nation which emerged in the eighteenth century; many date the beginning of the era of nationalism to the American and French revolutions. Political rule was no longer justified by the hereditary right of the ruler, but grounded in the will of the people, usually defined as male property holders.

The ideas of European nationalism were refined in Germany, particularly by Johann Gottfried Herder (1744–1803). Nationalism became a powerful ideology which justified the breaking up of empires, such as the Austro-Hungarian Empire, or the unification of territories that had previously been ruled by many different princes, such as Italy and Germany.

The ideal nation-state was culturally homogeneous—meaning that the people shared the same culture. Rare in practice, this homogeneity was sometimes imposed from above by the state through law, education, or even force, including pogroms, genocide, or denial of citizenship to particular groups. Nations without autonomous states do exist, such as Quebec and Finland for much of its history, and states often include more than one nation, such as Canada and Switzerland.

As Eric Hobsbawm and Benedict Anderson have pointed out, many national traditions thought to be ancient—Scottish clans and tartans, for example—are actually recent inventions designed to inspire national loyalty—and by extension, loyalty to state authority.

Flags, national anthems, dances, food, folk tales, and venerated works of art and literature all contribute to the feeling that one belongs to the nation, to what Anderson calls an imagined community.

Literature, as Edward Hartley Dewart made clear in his introduction to the first anthology of English Canadian literature (Selections from Canadian Poets, 1864), was felt to be essential for the production of national identity:

A national literature is an essential record of a country’s mental progress: it is the expression of its intellectual life, the bond of national unity and the guide of national energy. (ix)

Writing over a century and a half later, Laura Moss and Cynthia Sugars agree:

A nation exists when people believe it exists. People begin to learn certain national narratives and recognize particular symbols, which they then take to be inviolable; in the process, the narratives become self-constituting. (262)

Developing Canada as a Multicultural Nation 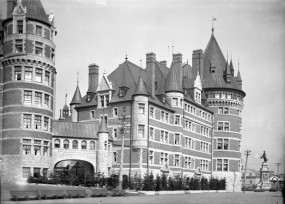 Château Frontenac in Quebec. Despite its distinct language and culture, Quebec was recognized by the Canadian government as a nation within Canada only in 2006. Topley Studio Fonds, Library and Archives Canada, item number TXC-664, accession number 1936-270 NPC, PA-012984

The Indigeneous peoples in the territory now called Canada encountered a variety of Europeans, such as the Vikings and Portuguese, before the French settled and claimed territory along the St. Lawrence. Britain’s acquisition of Quebec from France led to the Royal Proclamation of 1763 laying out the principles to be used to govern Indigenous peoples. This proclamation was a response to Pontiac’s War when various Indigenous nations around the Great Lakes resisted the heavy-handedness of the incoming British.

The Quebec Act of 1774 recognized French civil law and the Roman Catholic faith in order to consolidate French loyalties in the prelude to the American War of Independence (1775–1783). In the aftermath, settlers known as Loyalists, sometimes with their slaves, moved north. Some of these Loyalists were Black freedmen as well. 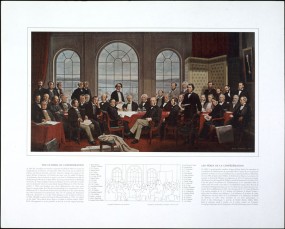 This painting depicts the attendees of the Charlottetown and Quebec Conferences in 1884, meetings that preceded Canadian Confederation and the BNA Act. “Fathers of Confederation.” Reproduction of Rex Wood’s 1967 painting. Roger Shares Services, Director of Office Services, Library and Archives Canada, accession number 1967-49-11, C-148218

After Confederation through the BNA Act (1867), the move to settle the North-West (now the prairie provinces) was met by the Riel Resistance at Red River in 1869. Manitoba and the Métis nation were founded together in 1870. However, as the defeat of the second Riel Resistance in Saskatchewan made clear, Canada at the time was not willing to accommodate more than two founding nations.

Neither French nor English Canada found it easy to distinguish their languages or cultures from those of France or Britain which led to a so-called colonial mentality in both cultures. Later, in the twentieth century, anxiety about distinguishing Canadian culture from that of the United States became a pervasive concern, particularly for English Canada.

The United States, with its larger economic base for publishing and distributing cultural works, has been perceived as a threat to Canadian cultural sovereignty. Efforts to imagine Canada as culturally homogeneous derived initially from the notion of the superiority of Northern peoples that German thinkers had developed to distinguish themselves from the French. Northernness remains an important idea in depictions and discussions of Canada (see Grace and Wiebe).

The idea that Canada contains many nations, that is, the Indigenous nations (as defined in the Constitution Act, 1982) and Quebec, has only recently taken hold (see Kymlicka). Within the last forty years, the Canadian government has also sought to officially recognize the contributions of Canadians from many different nations and ethnic backgrounds through the ratification of the Multiculturalism Act (1988), which built on the ideas formed in the Multiculturalism Policy (1971) and the Charter of Rights and Freedoms (1982).

Some welcomed the official recognition of diversity, while others felt the policy to be a way of designating certain groups as outside the dominant society (e.g., see Bissoondath). In fact, some critics have argued that the multiculturalism policy leads to token displays of diversity—such as food, song, and dance—instead of dealing with actual social injustices. They feel that such displays construct members of ethnic minorities as exotic, while taking the focus away from their political and economic exclusion.