Like Margaret Atwood, Armand Garnet Ruffo also re-envisions Moodie’s experiences and perceptions in his poem Creating a Country. The poem can be found in his book Opening in the Sky and in An Anthology of Canadian Native Literature in English, edited by Daniel David Moses and Terry Goldie. 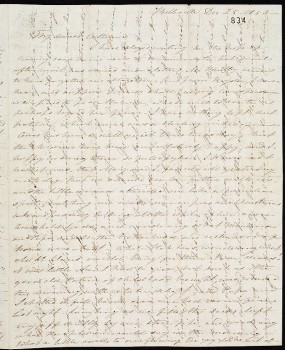 Cross-written letter from Susanna Moodie to her sister, 25 December 1853. Writers at this time often wrote this way to save paper and postage. Library and Archives Canada, archival reference no. MG29-D81, e000000528.