Print or
Save as PDF
Please Note: If you are using Mozilla Firefox, the PDF created using the above button will contain unusable links. Please use Chrome or Safari to create PDFs with working links.
Tell us what you think!
Drama Indigenous Literatures Literary Works

The Rez Sisters by Tomson Highway 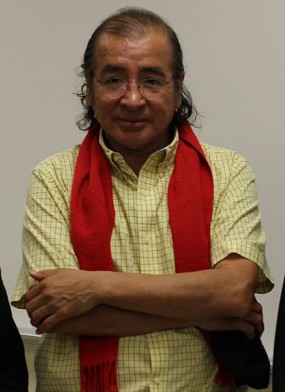 The Rez Sisters is part of Highway’s Rez Cycle. The Cycle begins with The Rez Sisters (1986), it progresses with Dry Lips Oughta Move to Kapuskasing (1989), and ends with Rose (1999). Each play follows life in the fictional Wasaychigan Hill Indian Reserve (“Wasy”) and blends languages.

The play follows seven women from the reserve as they organize their trip to play bingo in Toronto. It integrates Cree and Ojibway languages (now commonly referred to as N?hiyaw?win and Anishinaabemowin, respectively), and highlights the importance of Nanabush, a figure who some anthropologists classify as a trickster.

Highway includes a note on Nanabush in the sequel to this play, Dry Lips, which follows seven men from the same reserve. Nanabush, he says, is

as pivotal and important a figure in our world as Christ is in the realm of Christian mythology … Essentially a comic, clownish sort of character, his role is to teach us about the nature and the meaning of existence … (12)

The Rez Sisters thus asks many of its implied readers to deal with an unfamiliar context (the reserve), unfamiliar languages (Cree and Ojibway), unfamiliar mythologies (Nanabush), and the lives and concerns of people who they might not otherwise encounter on the Canadian stage.