1967 and “Lament for a Confederation” 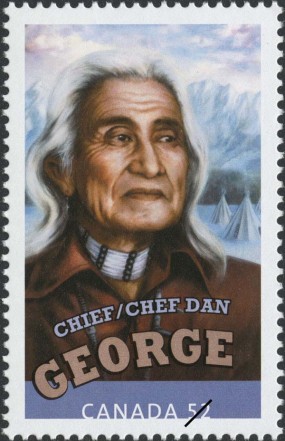 As an important part of broader social changes during the 1960s, Chief Dan George (Geswanouth Slahoot; 1899–1981) of the Tsleil-Waututh First Nation (then called the Burrard Band) delivered a speech that inspired many Indigenous writers. In 1967, Expo 67 in Montreal busily showcased cultures from around the world and fostered dialogue between French and English Canadian traditions (see Vance 385–90). Meanwhile, on the other side of the nation, George presented a very different message.

George gave his address, “A Lament for Confederation,” on 1 July 1967 at the celebration for Canada’s centennial in Vancouver. In his address, George critiqued colonial oppression, the stereotypes that inform it, and the correlated losses of Indigenous ways of life:

… since the white man came, I have seen my freedom disappear … When I fought to protect my land and my home, I was called a savage. When I neither understood nor welcomed this way of life, I was called lazy. When I tried to rule my people, I was stripped of my authority. (251)

But George didn’t stop with lamentation; he also asserted a vision of Indigenous cultural adaptation and renewal. He suggests that colonial tools of oppression can be turned against themselves to become a way forward to self-expression and self-determination:

I shall grab the instruments of the white man’s success—his education, his skills, and with these new tools I shall build my race into the proudest segment of your society. (252)

Influential Okanagan writer, teacher, and intellectual Jeannette C. Armstrong notes that along with E. Pauline Johnson, Chief Dan George was “perhaps one of the earliest Native influences on my own writing” (xvi), and suggests that his work helped draw out many more Indigenous voices across Canada.