Print or
Save as PDF
Please Note: If you are using Mozilla Firefox, the PDF created using the above button will contain unusable links. Please use Chrome or Safari to create PDFs with working links.
Tell us what you think!
Case Studies Fiction Gender & Sexuality Literary Works
To learn more about the publishing history of our Chapters, our editorial practices, and our approach to site-maintenance, please see our About page.

I like rubbing the edges of document and memory/fiction against one another. I like the friction that is produced between the stark reporting of document, the pseudo-factual language of journalism, and the more emotional, even poetic, language of memory. That’s why I used such a hodgepodge of sources in Ana Historic, a little nineteenth-century and very local journalism that sounds like a gossip column, a 1906 school textbook, various historical accounts, some contemporary feminist theory, and a school teacher’s diary from 1873 that was completely fictitious. 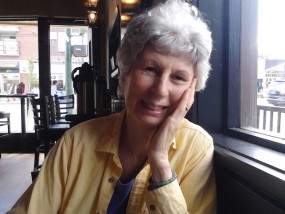 The erasure of the feminine from history dominates the text, as all three generations of women embody the progress of an inter-generational struggle against female subordination and exclusion. Mrs. Richards is slowly resurrected from patriarchal genealogies. Annie’s research lends a voice back to a woman without one, opening the reader to the socio-political origins of feminist struggle in the late 19th century. Annie’s late mother’s lack of a voice serves as the next generational iteration of such erasure, and an extreme example of the effects of the problem that has no name (Friedan 63; see Second-wave Feminist Expansion), or the widespread mid-twentieth-century female discontent with being relegated to the domestic sphere in an increasingly modern world. Annie herself is the catalyst for an emergence from erasure; she is a researcher stumbling upon a history that is as much a part of her own life as it is part of a feminist genealogy of change.

This novel explores the mutable identities of a woman erased from history, of a mother unable to cope with the rules that govern her access to society, and of a daughter striving to move beyond the societal strictures that caused the death of her mother. The novel proposes that women in dominant historical narratives can only be revealed through the diligent work of women in the future through generations of continued struggle. This novel subverts a neat, linear history (with a parallel subversion of linear narrative form echoed in its structure), choosing instead to open the reader to the possibilities of cross-generational connections that link feminist progress and freedom.