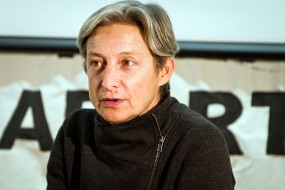 One of the most difficult ideas in gender studies is feminist philosopher Judith Butler’s idea that gender is a performative act. The idea of the performative comes from American analytic philosopher J. L. Austin (1911-1960) in his lectures How to do things with Words. Austin was the first philosopher to point out that there is a category of actions where saying something does something. Austin showed that there are times when we can do things with language as a challenge to the idea that language can only describe the world or ask about it. For example, when we say, “I do (take this woman to be my wife)” during a marriage ceremony we are actually taking someone to be our wife. For this act to work as performative, the ritual has to be performed by the right person at the right time and others would have to recognize their right to administer the act (5).

The difference behind the two views comes down to a question of agency. If gender is a kind of acting, there is someone doing the acting. They are putting on a gender, but they may have a real gender underneath their costume. Most importantly, an actor can stop acting. They can take off the mask, end the scene, or simply drop out of character. In contrast, if gender is a matter of impressions that consolidate over time, then there is no need for the actor playing a man or a woman to be a real man or woman. Our gender, in this latter sense, is not an expression or concealing of our essential being, but what others take us to be. Gender is a repeated utterance that congeals over the body over time, and how we perform our gender has ripple effects on others. By being a man in a particular way, we can influence what it means to perform masculinity and this is, in part, why gender expression can change over time and within different cultures. Once gender has congealed over the body it seems to be natural, but what queer theory tells us is that this natural appearance is illusory.

For Butler, then, gender is something we do rather than something we are. There are particular ways of being male or female, gay or straight, which are legible to others and recognized as gendered activity. However, this does not mean that people are not agents. As Butler notes in Undoing Gender, “[i]f gender is a kind of doing, an incessant activity performed, in part, without one’s knowing and without one’s willing, it is not for that reason automatic or mechanical. On the contrary, it is a practice of improvisation within a scene of constraint” (1). The sense of constraint matters for Butler’s theory. For gender to be performed it has to be readable within a series of constraints. Expressions of sex and desire that come outside of these constraints can be, and often are, policed. People are made to feel a great deal of pressure to preform a gendered identity that everybody around them can understand.

Importantly, for Butler, doing gender is communal. As she puts it, “one does not ‘do’ one’s gender alone. One is always ‘doing’ with or for another, even if the other is only imaginary” (Undoing Gender 1). One way of thinking about this is to say that gender can only happen within a real or imagined culture. If a person grew up on an island where there were no people, and they never leaned language, and they never saw an image of another person, they could in theory not have a performed gender. This also means that people can do gender differently in different communities, and at different times. In this way, gender is historic, local, and specific, but it also transitive, and unstable. The backlash to feminism and queer theory show how these movements, by challenging gender essentialism, threaten worldviews that take the permanence of gendered identity for granted.