Print or
Save as PDF
Please Note: If you are using Mozilla Firefox, the PDF created using the above button will contain unusable links. Please use Chrome or Safari to create PDFs with working links.
Tell us what you think!
History & Culture Producing & Evaluating 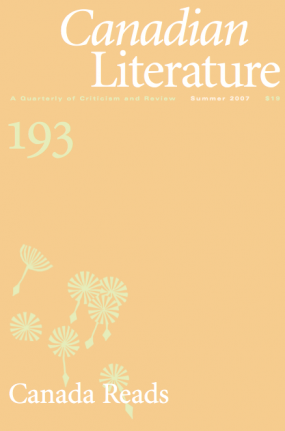 As Gillian Roberts argues in Prizing Literature, the show is a high-profile celebration of Canadian literature, not unlike literary prizes. But for Roberts, the show diverges from traditional awards in that it “does not limit its shortlist to texts published in the previous year. Instead, any text in Canadian literary history might be selected for consideration” (34). As literary critic Smaro Kamboureli argues in her discussion of Canada Reads, the popularity of the show is a sign of the ways in which Canadian literature has “reached new heights of prominence” (37). Rather than simply having to show that Canada has a literature worthy of reading, the CBC’s branding of Canada Reads implies that Canada has produced many books that evoke strong feelings for readers. As well, Canada Reads is built on the premise that it is pleasurable to listen to readers and panellists make arguments for their book based largely on value judgments. 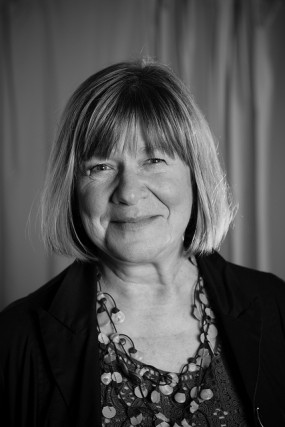 Shelagh Rogers is the host of the CBC Radio program The Next Chapter. Rachel Davey (TEDxGabriolaIsland), CC BY-NC-ND 2.0

At least part of the pleasure of Canada Reads comes from the way it blends the serious with the frivolous. It is a show about books, or literature, but as Danielle Fuller notes in her article Listening to the Readers of Canada Reads, academics have a hard time taking the celebrity panellists discussing the books seriously (11). While the show is imagined as a national celebration of Canadian writers and writing, the idea that only one of the five shortlisted books should be read by Canadians that year seems rather limited. As Roberts notes, the show blends the lowbrow Survivor and with more highbrow CBC literary culture. For examples of CBC’s highbrow literary tradition, think of Robert Weaver’s show Anthology, Shelagh Rogers’ show The Next Chapter, or Eleanor Wachtel’s show Writers and Company. As Roberts further notes, there is a tension between the show’s desire to celebrate Canadian literature and its need to be entertaining: “the celebration of literature through the nomination of a group of texts collides with the explicit rejection [or] elimination of all but one title, as books are voted out of the competition” (35).

But, that Canada Reads has the features of a game show does not mean that academics ought not to take it seriously. As Fuller argues in Canadian Literature,

“Canada Reads” is a “game”: it is a radio show (and less successfully, a television show) that adapts a popular reality-TV format (“Survivor”). It is not a university seminar, a literary journal, not an academic conference. … The producers of “Canada Reads” are neither academics nor literary reviewers: they are experienced mass media professionals who make radio programs for Canada’s public broadcaster. When, as literary academics, we cast our critical gaze upon a radio show, it is important to consider not only the implicit agenda of the producers and the discursive effect of the broadcast, but also the context and materiality of the show’s production. (13)

Fuller’s point is that if we want to critique Canada Reads, we ought to critique it for what it is—a game show about books on Canada’s public broadcaster—rather than for what some academics might like it to be—a university seminar filled with stimulating, thoughtful discussions of important works of Canadian fiction by qualified experts.

[Canada Reads] celebrates the shortlisted novels rather than engaging critically with them. Or it damns them on spurious grounds. The novels are pawns in a game. With the watered-down aestheticism of the readings, most often it has been the politics of the novels that is lost in the commentary on the texts. (8)

Moss argues that maintaining a critical stance keeps the focus on the social and cultural work that the individual novels do, a facet that is lost when Canada Reads is treated only as a game.

Over the last few decades, two trends in literary criticism have prevailed. While some critics are suspicious or concerned with what is lost in the process of representation, others focus on affirming or celebrating the ways literature works. On its face, Canada Reads looks like an affirmation of Canadian literature, and it does celebrate these books. However, in place of critical suspicion and close reading, Canada Reads offers a critique based on winners and losers. The point of the game is both to praise some books while criticizing others. Unlike the caucus race in Lewis Carroll’s Alice in Wonderland where everybody wins and all must have prizes, Canada Reads hooks and keeps its audience with the promise that some books will be judged and only one will survive. In discussions of literature that privilege affirmation, novels are frequently understood as valuable in and of themselves, but for Moss the novels discussed in Canada Reads are often spoken of as pawns in a game. It is sometimes as if the texts are placeholders for a type of conversation the judges want to have about Canada, in which case any commentary the novels themselves might make about Canada are in danger of becoming secondary to the texts’ role in telling the panellists’ version of a Canadian story. Still, since Canada Reads’ inception in 2002, it has produced multiple and varied stories of Canada, with winning texts covering issues of multiculturalism, Indigenous rights, sexuality, Quebec and Canadian politics and revisioning history in books set from Newfoundland to British Columbia.

Reading and the Genre of Canada Reads

In her article on Canada Reads, Fuller argues the need to respect the medium of the show’s production as she notes that the producers of Canada Reads wanted to create “radio that sounded lively, and that might generate some dramatic surprises” (14). She also points out that “[t]he choice of ‘non-professional’ readers was deliberate, and so was the engagement with celebrity culture which, the producers hoped, would bring some new (and hopefully younger) listeners to the show precisely because it was not like a ‘serious’ book review program” (14). The show’s desire to be entertaining by using celebrity judges has sparked some debate. For instance, for Kamboureli, the use of celebrity judges on Canada Reads is part of a larger naturalization of the culture of celebrity in Canada (38).

Canada Reads is also what Fuller and DeNel Rehberg Sedo call a mass reading event (MRE). According to Fuller and Rehberg Sedo, MREs mark the ways in which reading, and especially the reading of long fiction, has become part of popular culture, and the way that “older cultural values that are attached to [reading] appear to be in tension with its more recent cultural forms” (15).

For literary critic Daniel Coleman, reading is a countercultural activity, in opposition to mass culture, and further, it has a spiritual dimension:

Reading simultaneously isolates us and requires us to actively bridge the structure of absence between ourselves and others. It demands that we become people who digest words slowly and thoughtfully. Because it is slow and reflective; because it requires active, rather than a passive, audience; because it is dialogical, a kind of conversation among an author, her reader, and other readers; because it can activate both affirmation and suspicion; and because even the most straightforward forms of writing call for multiple levels of interpretation—for all these reasons, reading is spiritual (39).

For Coleman, it is the isolation of reading, and the way that it slows the reader down, that makes the process of reading spiritually edifying. The conversation with other readers, Coleman implies, is with other expert readers—readers who have also taken the time to slow down with the text and have a dialogic relationship with their valued object of study. This type of slow, careful, critical reading practice, however, is not the kind of reading practice invoked by MREs like Canada Reads.

Mass reading events (MREs) are one of these forms and part of a popular literary cultural arena that positively bristles with various media practices, technologies, and opportunities to interact with other readers. Like all cultural producers, those involved in the design and delivery of large-scale shared reading events have to compete for their audience with many other cultural activities, entertainment options, and leisure pursuits. (15)

The CBC, for example, uses Facebook and Twitter to encourage readers to be active participants in Canada Reads, and their website uses blogs, videos, and audio to create a multi-media experience. Rather than encouraging readers to read slowly and thoughtfully, readers are encouraged to read socially and competitively. Reading here is a competitive activity as well as a communal event as the CBC encourages readers to debate about the books they think should win Canada Reads, and readers are encouraged to rank the tweets and comments users make about the books.