Print or
Save as PDF
Please Note: If you are using Mozilla Firefox, the PDF created using the above button will contain unusable links. Please use Chrome or Safari to create PDFs with working links.
Tell us what you think!
2018 Edited Collection Available Literary Works Poetry

Dionne Brand: No Language Is Neutral

Dionne Brand’s No Language Is Neutral (1990) is a set of poems that can be understood as a meditation on migration. The book addresses the theme of movement from one location to another as it describes a journey from the Caribbean to Canada. In doing so, it outlines (and asks questions about) a conception of identity that is influenced by movement, dislocation, and variability. Brand’s engagement with migration also asks questions about the nation-state; Benedict Anderson regards the nation-state as the result of a collective imagining that is shaped by hegemonic or dominant values (44), and writers like Brand question this illusion of cultural unity. The following sections of this chapter summarize some scholarly debates that have taken place around No Language Is Neutral and outline some strategies for interpreting how Brand treats the experience of migration and related topics. 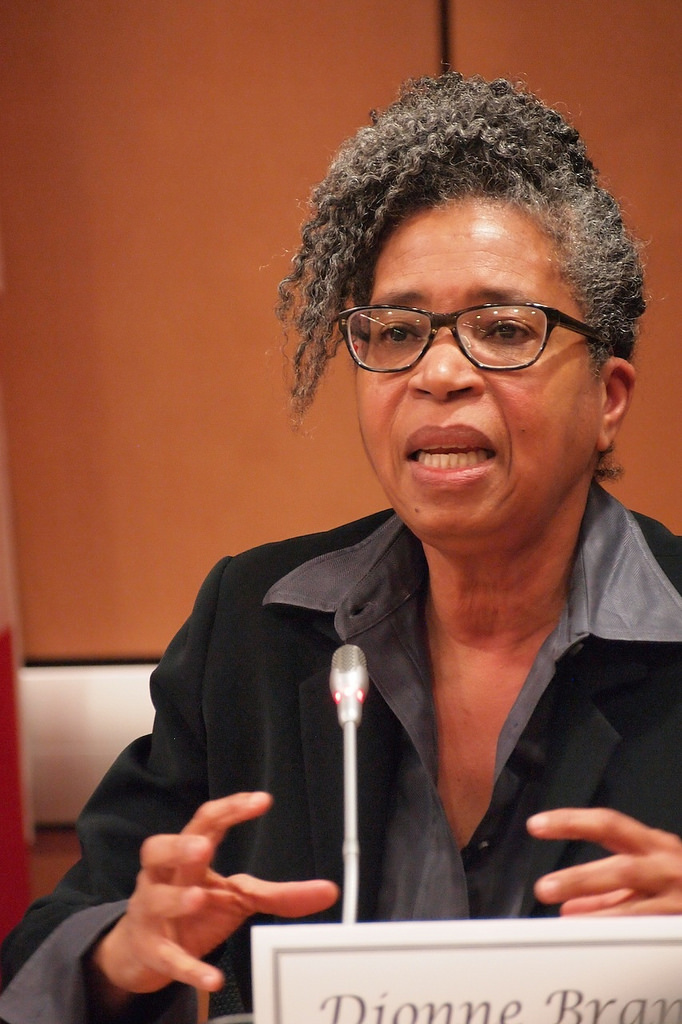 Dionne Brand at the panel “The Political Poem,” organized by Fred Wah in 2013. Pearl Pirie, CC BY-NC-ND 2.0, via Flickr.

No Language Is Neutral belongs to traditions of Canadian, Caribbean, postcolonial, and postmodernist writing. Its title comes from Derek Walcott’s Midsummer (1984), which conceives of the English language as “a murmurous cathedral / where some took umbrage, some peace, but every shade, all, / helped widen its shadow” (LII 15-17). Brand’s book begins with descriptions of a landscape and an identity that have been shaped by the traumas of slavery. Subsequent sections include poems addressed to women who took part in Grenada’s revolutionary government in the late 1970s and early 1980s (a left-wing movement that emphasized literacy and was overthrown in 1983 by an American-led invasion); the titular sequence, featuring a meditation on the speaker’s grandmother and experiences of alienation in Toronto; and a final exploration of language and sexual orientation. As you read, think about how these sections address migration and, in turn, issues of identity, language, and nation.

This is a challenging text. Don’t worry if it at first seems difficult to pick out characters or events; it may be easier to begin by reading each poem impressionistically, noting which images or changes in tone strike you and then moving on to engage the other ideas presented in this chapter. (See the chapter guide on close reading poetry for more tips.)