Many early anthropologists argued that all societies transition from hunter-gatherer, to nomadic herding, to agriculture, to the formation of large cities in the same way, and that the later stages were superior to the earlier ones. Anthropology has moved on from this idea; however, the idea that certain societies are superior to others is connected with other widespread ideas such as the myth of progress (new technologies are invariably better), Whig history (past societies are evolving towards democratic freedom), Social Darwinism (the fittest humans survive best, so the poor should be left to starve), and Scientific Racism (whites or Caucasians are at the top of an evolutionary ladder). These ideas purport to describe reality, but in fact, they are successful because they confirm the beliefs of those in power. At best they are ethnocentric and blinkered; at worst, they rationalize brutal oppression. These generalizations were frequently applied to languages and other modes of communication.

Example of the Mayan book, the Dresden Codex, written before contact with Europeans. Page 9 adapted from the 1880 edition by Förstemann: Wikimedia Commons

Cultures without writing, or without the kind of writing familiar to Europeans, such as hieroglyphs, pictographs, or characters, were seen as backward, as at an earlier stage of civilization. (For more on some New World writing systems, see Mesolore). Similarly, oral narratives were seen as inferior to written literature.

Oral narratives are preserved in human memories, passed down from generation to generation. European thinkers saw epics, such as Homer’s Iliad or the Germanic Beowulf, that were sung before they were written down, as precursors to written literature. This distinction produced a binary between orality and literacy—what anthropologists called the “Great Divide,” a divide that is sometimes called a “relic of academic colonialism” (Jack Goody qtd. in Finnegan 270). This binary privileges literacy over orality and makes it easy to dismiss whole cultures.

The categorical division between orality and literacy supported the idea that oral traditions as suitable only for children, rather than a system for transmitting important philosophical and moral concepts. In fact, these traditions taught important social and cultural principles, such as the importance of hospitality and of respect for those weaker than oneself.

Anthropologists once believed that culture was progressive and that literacy was transformative. Persons and cultures that became literate were deemed to have left oral culture behind by progressing into literacy. In his influential book, Orality and Literacy (1982), Walter J. Ong argues:

Oral cultures indeed produce powerful and beautiful oral performances of high artistic and human worth, which are no longer even possible once writing has taken possession of the psyche. (14, emphasis added)

Harvey Graff addressed the widespread belief in the transformative power of literacy in his book The Literacy Myth. In fact, many groups of literate people in Canada in the nineteenth and early-twentieth century, such as women, Jews and Irish Roman Catholics, found their access to well-paid jobs, suffrage, or other forms of social power blocked no matter how literate they were. Literacy, Graff argues, is just one skill or attribute that citizens need to participate in national life.

With respect to the relationship between European literacy and other ways of communicating, Christopher Teuton observes:

no form of communication is inherently more clear, present, or “truthful” than another. The privileging of writing as recorded speech has led to the perception that context-dependent forms of signification, such as Native American oral and graphic traditions, are less culturally advanced. This privileging has contributed to the historical and political subjugation of Native communities by characterizing them as oral, nonliterate peoples. (xv)

Passed in Upper Canada in 1857, An Act to Encourage the Gradual Civilization of the Indian Tribes in this Province, reflects the belief that literacy was equivalent to becoming civilized. It required that any Status Indian man who wanted the same rights as other Canadian men be able “to speak, read and write either the English or the French language readily and well” (Province of Canada). Few Status Indian men took advantage of this clause, which was retained in the Indian Act (1876), because it meant that they would be separated from their reserve communities. 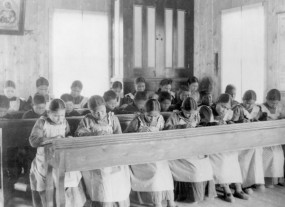 Studying at the residential school in Fort Resolution, N.W.T. No date. Library and Archives Canada: PA-042133

The Western intellectual frameworks that emerged to justify colonization not only viewed literate cultures as superior, but also used literature as a way to justify taking land from Indigenous people. A great literature was seen as evidence that a nation had achieved a high level of civilization. In 1864, Edward Hartley Dewart compiled Selections from Canadian Poets, justifying his efforts this way:

A national literature is an essential element in the formation of national character. It is not merely the record of a country’s mental progress: it is the expression of its intellectual life, the bond of national unity, and the guide of national energy. It may fairly be questioned, whether the whole range of history presents the spectacle of a people firmly united politically, without the subtle but powerful cement of a national literature. (ix)

Clearly, Dewart felt that Canada required a national literature, the hallmark of civilization. Indigenous cultures have their own traditions grounded in origin stories, and these stories continue to anchor people’s understandings of their territories and mark the beginning of their own cultural records.

To move beyond the binary between orality and literacy, many academics are now turning to multiple levels of engagement with cultural expression, rather than focusing only on literature. For instance, the experience of listening to oral performances can, and continues to, inform scholarship. To remedy the bias against orality, scholars use the term orature to refer to speeches, oral tales, and other narratives as an analogous word for literature (Gingell and Roy 5). Others use oral literature or verbal art (Gingell and Roy 6–7). Many storytellers do call their oral narratives stories, however, and we will use all of these terms in this chapter.